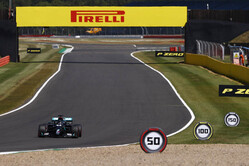 The key task for the teams during free practice on Friday was to acclimatise to the soft C4 compound, which has not been run at Silverstone before, and assess its characteristics in these warm conditions on a very severe track.

Ambient temperatures peaked at 34 degrees centigrade at lunchtime, while track temperatures hit 48 degrees in the afternoon. This provided a big challenge for the tyres: especially the left-front.

The teams were able to capitalise upon their knowledge of Silverstone set-up from last weekend and focus on performance. Using the softer C4 compound, the fastest time in FP2 was 1.6 seconds quicker than it was at this time last week.

All three nominated compounds were used during free practice, with the teams concentrating on the hard and the medium at the start of FP2 to gather information that will be vital when it comes to establishing a race strategy.

Mario Isola: "With a nomination that's one step softer compared to last weekend and a track that is notoriously demanding on tyres, the teams certainly had plenty to think about and try out in free practice, even though they were only here a week ago. With two stops likely to be the norm on Sunday, a wide variety of race strategies are possible. As expected on the softest compound in particular, we saw some blistering, but also a very rapid speed over one lap that's likely to lead to a new track record this weekend. There's no doubt that the soft won't be the favoured race tyre, so the challenge is to get the most out of it as part of an overall grand prix weekend strategy, which will start with the decisions made during qualifying tomorrow. The information gained today will be an important part of that decision-making process."