Di Resta on standby for McLaren 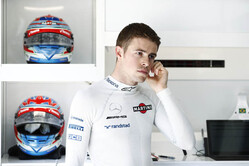 Former Force India driver, Paul di Resta is on standby for McLaren at Silverstone this weekend.

The Scot will be called upon should either Carlos Sainz or Lando Norris be unable to drive.

Like Racing Point, McLaren is able to call upon the services of Mercedes reserves, Stoffel Vandoorne should the need arise, however, while the Belgian is tied-up with his Formula E activities at present, the Mexican is not eligible for a superlicence following a change to the rules which stipulate that a driver requires 300km of running before participating in a Grand Prix weekend, the Mexican having last raced in 2016.

Di Resta spent three seasons with Force India, and alongside his Sports Car activities he is a pundit with Sky Sports F1.

He last raced in F1 in 2017 (pictured) when he deputised for an unwell Felipe Massa at Williams over the Hungarian Grand Prix weekend.

Though he has had a seat fitting at Woking today he will not be in close contact with the team unless called upon due to the strict CODID-19 protocols.