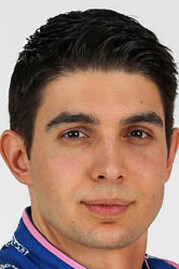 Esteban's karting career began in 2006, age 9, when he finished eighth in the French Minime Championship. The following year he won the championship.

In 2008 he stepped up to the French Cadet Championship, winning the title at the first attempt, before moving up to the international scene a year later.

Moving up to KF3 for 2010 he remained there in 2011, winning the French title and finishing runner-up in the WSK Euro Series.

In 2012, Esteban made the switch to single-seaters, contesting the Eurocup Formula Renault 2.0 series.

A largely disappointing season saw him finish fourteenth overall, though this included a podium at his home round at Le Castellet.

The youngster also took part in a number of Formula Renault 2.0 Alps events with Koiranen, the Frenchman finishing seventh overall with two podiums, both of which came at the Red Bull Ring.

The following year he remained in Formula Renault, contesting the Eurocup and NEC with the ART Junior Team. Taking three podiums, including his maiden win (Le Castellet) he finished the Eurocup third overall.

Having contested the Macau Grand Prix with Prema Powerteam in 2013, he remained with the Italian outfit in 2014, contesting the European Formula 3 Championship. 21 podium finishes, including 9 wins, saw the youngster claim the title at the first attempt, winning the crown with a race to spare.

In addition to three rounds of the Formula Renault 3.5 Series, 2014 also saw Esteban make his F1 debut, the youngster driving the Lotus in the post-season Abu Dhabi test.

Meantime, even before securing the F3 title, Esteban had been signed to Mercedes junior team.

2015 was another strong season for the youngster, taking the GP3 title at the first attempt, with ART Grand Prix, and F1 tests at Barcelona and the Red Bull Ring with Force India.

On 3 February, Esteban, was revealed as Renault's reserve driver, a week later he was confirmed as a member of Mercedes DTM squad.

On 11 August, at the height of the summer break, it was announced that Esteban would replace Rio Haryanto at Manor racing, the Indonesian driver having failed to raise the necessary backing.

Esteban's recruitment came at a time the youngster was enduring a difficult debut season in DTM, his best result to date being a 9th at Zandvoort.

Prior to his maiden Grand Prix, at Spa-Francorchamps, Esteban had made four FP1 appearances for Renault and driven both days of the Silverstone post-GP test for Mercedes.

Due to the fact that he only contested nine races it would be wrong to attempt to come to any sort of conclusion regarding Esteban.

In qualifying the youngster clearly struggled, but then Wehrlein had the luxury of those extra dozen outings. That said, in Malaysia and Japan he out-qualified the German.

Gradually finding his feet on race days he also soon had the better of the German, leading him home on no less than six occasions. Indeed, keeping out of trouble, though clearly not afraid to 'get down to it', Esteban finished every race he started.

In Brazil he looked set to add to the team's points tally, seemingly heading to a well-deserved ninth. However, unable to hold off the vastly more experienced Fernando Alonso and Valtteri Bottas, it was not to be.

An ambitious drive in Abu Dhabi saw the Frenchman battling Felipe Nasr, seemingly for the future of their respective teams, though ultimately his final outing of the year was marred by a clash with his Manor teammate.

It is said the pair had little time for one another, and the situation was hardly helped by the fact that Force India chose Esteban over Wehrlein when seeking a partner for Sergio Perez for 2017. Indeed, having been informed that the reason for his rejection was because he didn't gel with the team, Wehrlein's mood will not have been helped by his subsequent rejection for the Mercedes berth.

Heading into the new season, we wrote: "While it remains to be seen whether Force India can maintain its impressive form of 2016, it is unlikely the Silverstone based outfit will give Esteban a dud, and with a benchmark of the calibre of Perez, by the end of 2017 we should have a much better idea of the youngster's talent."

First off, the VJM10 wasn't a dud. Though it took a few races for the team to get into its stride - a period during which Perez gave some of his strongest performances - it was soon clear that 'the little team that could' was once again going to be 'best of the rest'.

The numbers say it all; on only one occasion did the team fail to score a point, while in 16 of the 20 races both drivers added to the team's tally. OK, there were no podiums, but with the obvious superiority of Mercedes and Ferrari, not to mention Red Bull, that was to be expected.

As for Esteban, his pace, determination and maturity caught many on the hop, not least his teammate, and as the season developed it became clear that we could always count on the Pink Panthers to entertain.

For much of the year the drivers appeared to be con-joined, be it qualifying or on race day the pair were constantly scrapping over the same piece of tarmac. Not only did they finish the season 7th and 8th, following the departure of Jolyon Palmer the first letters of their surnames meant they were together when drivers were listed alphabetically... there was no separating them.

Be it surprise as Esteban's talents or doubt in his own, Perez' unhappiness at the situation first really became apparent in Canada. Asked to move aside for his teammate in order that he might attack Ricciardo, the Mexican refused even though told the position would be handed back if the Frenchman was unsuccessful.

Weeks later the pair actually clashed on track in Azerbaijan, resulting in Perez's first DNF of the season. While the incident cost Esteban, who was wholly to blame for the clash, a better result also, the fact is that considering how the race ended, it was not entirely impossible that Perez might have made it to the podium, possibly even the top step.

Things really boiled over in Belgium however, when Perez twice forced his teammate into the wall on the infamous run down to Eau Rouge. An already tense situation was not helped by Esteban's claim that the Mexican had tried to kill him. As a result the team instituted a "no fighting" rule which remained in place for the remainder of the season, much to the disappointment of both drivers and millions of race fans.

In qualifying, while Perez was the quicker in the early stages of the season, as it developed so Esteban often got the upper hand, the Frenchman putting his car four places ahead of the Mexican at his home race.

Somehow able to continue despite the numerous clashes, Ocon gave new meaning to the word consistency, though Romain Grosjean finally put paid to his impressive run of 27 consecutive finishes when he took out the innocent Frenchman in Brazil.

His qualifying performance at Monza in atrocious conditions was one of the best of the year, while as early as Melbourne, where he skilfully dealt with Alonso, Sainz and Hulkenberg, it was clear a major new talent had arrived.

In his first full season, Esteban had more than proved himself, in his second he had to build on that. Having improved his qualifying in the later stages of the season, to go along with consistency and pace, he now had to hone his race craft. We opined that another strong season in 2018 could well see him step into the second seat at Mercedes.

Indeed, With France rejoining the calendar, what better time for the country that gave us Prost, Arnoux, Pironi, Beltoise, Cevert and Lafitte, in terms of Esteban, Grosjean, Gasly and Leclerc to provide another winner.

In 2018, as in 2017 Esteban and Perez were inseparable. Not in a 'buddy-movie' way, but the fact that they always appeared to be scrapping for the same piece of tarmac, alongside one another on the grid and even sharing slots on the timesheets.

Indeed, when Perez began the legal action that was to force Force India into administration, we were almost expecting Esteban to follow (law) suit.

Having lost out to Perez in qualifying in 2017, this was an area in which Esteban significantly raised his game this time around, the 7-13 deficit of the previous year turning into a 16-5 domination.

However, as a result of usually finding himself starting behind his teammate, this saw Perez regularly challenging, and beating, Esteban off the start-line the following day.

A poor season opener in Melbourne, largely due to lack of pace in qualifying saw both cars finish outside the top ten, though a couple of weeks later Esteban scored the team's first point of the year.

However, in Azerbaijan the youngster screwed-up, big time. Starting from seventh, this was his opportunity to shine, but a reckless move at the start meant the Frenchman's race was over before it had begun. Meanwhile, Perez, who had dropped down the field to fifteenth, was able to work his way back up through the field - admittedly benefitting from the Red Bull wipe-out - to take the final place on the podium, the only time in 2018 that a non-Mercedes, Ferrari or Red Bull driver managed to do so.

Taken out by countryman Gasly on the opening lap at Paul Ricard, broke a point-scoring run that saw him amass 28 points from six races as the youngster sought to make up for Baku.

In the days following the team's move into administration, Esteban and Perez raised morale by finishing 6th and 5th at Spa, the Frenchman repeating his result a week later in Italy.

While his decision to back off and not challenge his teammate on the first lap at Spa suggested that Esteban was learning from his mistakes, a needless tangle with Sainz in Mexico suggested otherwise.

Then came Brazil, and a clash with race-leader Verstappen that divided fans and drivers alike. For what it's worth, we lay the blame at the feet of the Red Bull driver.

With Bottas retained alongside Hamilton, Stroll joining Perez at Racing Point and Williams opting for George Russell and veteran Robert Kubica, Esteban was left without an F1 seat for 2019, a situation that left the sport and its fans as confused as the Frenchman himself.

Retained as a test driver for Mercedes, one felt that that the only thing that would prevent him joining Hamilton in 2020 was if Bottas claimed the title, winning at least half the races in the process.

On the other hand, had Kubica's return not worked out, we wondered if we might see Bottas head back to Williams and Esteban joining Hamilton a little earlier than planned.

Though Kubica's return didn't work out as planned and Bottas didn't win the title, Esteban does return to the F1 grid in 2020, though not with Mercedes.

At the end of August it was announced that Esteban would be joining Renault where he would partner Daniel Ricciardo.

The Frenchman almost made a return earlier than planned when Hamilton was taken ill in Germany. Though the Briton made a sufficient recovery to be able to take part in the race, on reflection, when one considers the disaster it proved to be for the world champion and his team, Hamilton may well wish that he had been replaced.

Despite continuing as Mercedes reserve, at the end of season test in Abu Dhabi, Esteban was released in order that he could spend two full days in the Renault.

While the move appears to draw a line under his Mercedes career, many feel it was the right thing, for while it was widely felt the Frenchman deserved to be back on the F1 grid, few believed he would have been as good a team 'mate' as Bottas to the world champion.