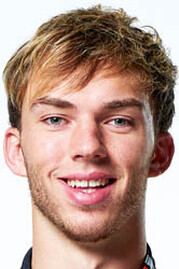 Pierre's racing career began in karts, when, aged ten, he contested the French Minime Championship, finishing the season 15th overall. The following season he finished sixth, and in 2008, now in Cadets, he finished fourth.

Finishing runner-up in the CIK-FIA European Championship (KF3) in 2010, the following year Pierre made the move to single-seaters, contesting the French F4 Championship. Wins at Spa, Albi and Le Castellet were enough to see him finish fourth in the championship.

He remained in Formula Renault 2.0 Eurocup in 2013, taking the title with wins at Moscow, the Hungaroring and Le Castellet. The final, title deciding event, saw a controversial clash with title rival Oliver Rowland, who incurred a drive-through penalty.

That same year, Pierre made his GP2 debut at Monza, replacing Caterham Racing driver Tom Dillmann who had "other commitments". He subsequently took part in the post-season GP2 test with DAMS, opting to join the team for 2015 alongside (Williams test driver) Alex Lynn.

Whilst it was a mixed season for Pierre, the Frenchman involved in more than his fair share of incidents, 2015 at least saw the Frenchman make his F1 debut having been named as reserve driver for the Red Bull teams. At the post-Spanish GP test, Pierre, driving the Toro Rosso, completed 131 laps, finishing the day seventh overall. Next day, now in the Red Bull, he finished third overall, another outing in the RBR11 coming in the post-Austrian GP test.

In mid-January 2016, still a member of the Red Bull Junior Programme, it was announced that Pierre would contest the GP2 Series with Prema, which was making its debut in the series. His teammate was 2015 European Formula 3 runner-up and GP2 rookie Antonio Giovinazzi.

Pierre won the 2016 GP2, making history in the process as the championship was to subsequently be renamed F2.

With 4 wins, the Frenchman narrowly beat his rookie teammate to the title, the difference being just 8 points.

At the end of 2016, Pierre was given the chance to broaden his experience, by racing in the highly competitive Japanese Super Formula Championship along with his commitments as test driver for Red Bull and Toro Rosso and an outing with the Renault e.dams Formula E team replacing Sebastien Buemi in New York as the Swiss fulfilled his WEC commitments.

On 26 September, it was announced that Pierre would make his F1 race debut in the Malaysian GP, replacing Daniil Kvyat. Finishing 14th, what was most impressive was that the youngster made it to Q2 on his F1 qualifying debut.

Finishing 13th in Japan, Pierre was forced to miss the United States Grand Prix in order to contest the final round of the Super Formula series. In one of those strange twists of fate, while Kvyat was called in to replace him in the Toro Rosso, bad weather meant the cancellation of the Super Formula event and therefore Pierre missed out on the title.

Solid performances in Mexico and Brazil were followed by a half-hearted outing in Abu Dhabi, but by that time the Faenza outfit had already decided to retain Pierre for 2018.

Five outings wasn't nearly enough for us to get an idea of the French youngster's ability, but it gave him some decent ground work ahead of his first full season.

Going into 2018 however, the question mark wasn't so much hanging over Pierre, but rather the team's new engine partner Honda, not forgetting the fact that the car would be the 13th chassis from Toro Rosso... and we know how tempting fate worked out for Red Bull with the RB13.

All that was forgotten a couple of weeks later however, when the youngster finished an amazing fourth in Bahrain - having qualified sixth - and while the retirements of the Red Bull pair and Raikkonen certainly aided his cause, the fact is that even without their various issues he would have finished best of the rest.

While it was back to reality in China, where he finished 18th, it was by now becoming clear what the team's philosophy was, as reports emerged that just three races into the season an approach had been made to secure the services of McLaren protege Lando Norris to replace Hartley.

While the team played down the reports, it was clear that when updates became available they were to be found on Pierre's car long before his kiwi teammate got a look-in.

When it was finally confirmed that Red Bull would be switching to Honda engines for 2019, it came as no surprise that Toro Rosso was called on to act as guinea pig, and though Hartley bore the brunt of the numerous grid penalties that followed as the Japanese manufacture sought further improvements, so too Pierre had his fair share.

As a result of the penalties Sunday afternoons were that little bit harder, and in a midfield as hotly contested as that witnessed for much of the season it was inevitable that points finishes would be hard to come by.

Nonetheless, Pierre finished a strong 7th in Monaco and 6th in Hungary, and though there were just two further points finishes over the course of the year he out-scored his teammate by 25 points.

Known to be one to run to the media even before he entered F1, Pierre continued to show signs of this in 2018, and as the season progressed he appeared to delight in rubbishing his teammate. Indeed, as the relationship soured, in Brazil he refused the order to yield to Hartley and in the process cost the kiwi and the team a point or two.

Following the departure of Ricciardo to Renault, for 2019 Pierre was promoted to the 'big team', where he would partner Verstappen.

Like the Dutch youngster, Pierre has a very high opinion of himself and his talent and is not known for his compromising nature.

In fact, the 'war' never happened, certainly not on track, though it may have happened in Pierre's head.

The Frenchman's problems began before the season had even started, crashing twice in pre-season testing.

China marked the first time he made it to Q3, while on Sundays his race pace was notably slower than his teammate's.

A driveshaft failure prevented a better finish in Baku, while strong performances in China and Monaco added much-needed points to his tally along with a couple of fastest laps.

Monaco however didn't represent a turning point for Pierre, certainly not in the positive sense. In Canada he was out-qualified by Ricciardo, and finished a disappointing 8th, while teammate Verstappen, who had been eliminated in Q2 due to a yellow flag, finished 5th.

His home race witnessed further disappointment, Pierre finishing tenth, behind the McLarens, a Renault and Kimi Raikkonen in the Alfa.

In Austria, where Verstappen scored Red Bull-Honda's maiden win, Pierre finished 7th, and while he finished 4th at Silverstone, his best result of the season thus far, there was already speculation over his future.

Though he finished sixth in Hungary, by the time of the summer break he had 63 points to his teammate's 181, and while it was widely thought that Pierre would not be retained for 2020, few were expecting him to be dropped mid-season.

Though Red Bull has history - boy, does it have history - the fact that its young driver programme was depleted, leaving most feeling that the team would allow Pierre to see out the season before making a bid for a replacement for 2020.

However, on the very day F1 broke up for the summer holidays, Red Bull announced that Pierre was heading back to Toro Rosso, where he would replace rookie Alex Albon who was to be promoted to the 'big team'.

In a year in which we were hoping Robert Kubica would provide the sport with a much needed fairy-tale, it was Pierre who actually gave the sport something to smile about.

Mindful of the public pain that Daniil Kvyat had gone through a couple of seasons earlier, most expected Pierre's shoulders to sag also, and the Frenchman to disappear into F1 obscurity.

However, back in the relative comfort of the Faenza team, Pierre was a new man, a total revelation in terms of pace and consistency.

In his first outing with Toro Rosso he came home 6th, with further points finishes in Belgium, Singapore, Japan and Austin. However, it was in the difficult conditions in Brazil where he truly shone, finishing second to Verstappen and holding off Lewis Hamilton in a last lap drag race to the flag, thereby giving the Faenza team its best result since Vettel's win at Monza in 2008.

Retained at Toro Rosso for 2020, it remains to be seen whether Pierre can pick up where he left off in 2019. Though he would appear to be the obvious choice should Albon fail to stay the distance with Verstappen, one has to wonder if Red Bull and the 'Max factor' was just a step too far for Pierre, and that he works best in the relative comfort zone that is Toro Rosso.

Though he scored that mighty podium finish in Brazil, the fact is that during his time at Red Bull alongside Verstappen, he simply couldn't cut it. Then again, he isn't the first, and he won't be the last.