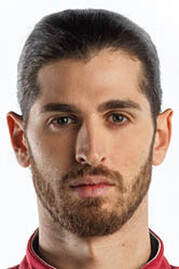 "The first time I had a steering wheel in my hands was when I was 3 years old," reveals Antonio. "My father let me drive in the backyard with a kart for children. But to compete I had to wait the age of 7."

Making his debut in 50cc karting in 2001, Antonio finished third in the Apulia Regional Championship, while also finishing fourth in the Csai Cup in Val Vibrata.

In the years that followed he soon began to make a name for himself, winning numerous regional titles and finally, in 2006, the Italian National Trophy 60cc.

2007 saw the youngster move up to KF3 and a strong season was capped by qualifying for the European KF3 Championship in Sosnova.

He remained in KF3 in 2008, finishing runner-up in the 38th Trofeo delle Industrie in Parma and the Copa de Campeones in El Vendrell, Spain. He wrapped up the year with his first results in the challenging WSK International Series and qualified for the final phase of the CIK-FIA European Championship.

2009 witnessed another step up the ladder as he contested the new KF2 series, finishing third in the European Championship Qualification Central Region KF2 and also impressing in the WSK International Series.

2010 not only saw Antonio win the WSK Master Series KF2, he also won the prestigious WSK North American Series in Las Vegas while making his single-seater debut in Formula Abarth, taking a second and a sixth place at Vairano.

In 2012, Antonio made the move to single-seaters, winning the Formula Pilota China series courtesy of 6 race wins and 13 podium visits, before returning to Europe where he won two rounds of the Formula Abarth European Series at Monza. The youngster even found time for a bit more karting, winning the Sentul Kart Grand Prix in Indonesia and the Kerpen round of the ADAC Kart Masters.

F3 beckoned, and in 2013 Antonio finished runner-up in the British Formula 3 International Series, winning races at Silverstone and spa Francorchamps. His other exploits were not so successful, the Italian finishing 10th at the Masters of F3 at Zandvoort, 16th at Macau and 17th in the European F3 Championship.

2014 saw Antonio finish 6th in the European F3 Championship, and while there were wins at the Red Bull Ring and the Nurburgring, the youngster suffered a run of mid-season technical issues that compromised his title chances.

A far stronger season in 2015 saw Antonio finish runner-up in the European F3 Championship with 20 podium visits that included 6 wins. The Italian wrapped up a strong year by not only winning the Masters of F3 at Zandvoort but making an appearance in DTM with Audi.

A perfect season was made that little bit better when the prestigious Autosprint magazine named Antonio its most promising driver (Casco d’Oro Tricolore).

2016 saw the youngster move up to GP2, while also finding time for some WEC LMP2 and European Le Mans Series.

Though his debut GP2 season got off to a slow start, at Baku he won both races - the first driver to do so since Davide Valsecchi in 2012 - and further wins at Spa, Monza and Sepang saw him head to Abu Dhabi with a chance of winning the title. However, it was not to be, the Italian losing out to Prema teammate Pierre Gasly.

However, it wasn't all bad, in September it was announced that Antonio would perform simulator work for Ferrari, while company president Sergio Marchionne subsequently named the youngster as Ferrari's third driver for 2017.

Courtesy of those Ferrari links, when Pascal Wehrlein was injured in the Race of Champions in February it was Antonio who was called on to replace the German for much of pre-season testing.

In Australia as reserve driver for Ferrari, when Wehrlein declared himself unable to contest the remainder of the Melbourne weekend Antonio stepped into the car just ninety minutes ahead of qualifying.

That he qualified 16th, one place behind Ericsson and only missing out on a Q2 slot due to an error in the final corner, was one thing, that he took his car to 12th next day quite another. It was a spirited performance in totally out-classed equipment, but the Italian impressed.

Unfortunately he was to blot his copybook just a couple of weeks later, crashing out of the Chinese Grand Prix after just 3 laps, having again performed well in qualifying.

The previous day he had crashed in qualifying, but still made it to Q2, unlike his teammate, however, the race crash was silly and needless, the Italian misjudging the conditions and hitting the wall on the pit straight.

With Wehrlein fit and back for duty in Bahrain, Antonio never got the opportunity to make up for his Shanghai mistake, and while he performed well in 7 FP1 outings for Haas over the remainder of the year, this wasn't enough to secure a seat at Sauber for 2018 where Ericsson has been retained for a fourth season alongside Charles Leclerc.

For 2018, Antonio fulfilled testing duties for both Ferrari and Sauber, making appearances for both at the in-season tests in Spain and Hungary, before wrapping up the year with an appearance for the Swiss team in the post-Abu Dhabi test having now been confirmed as one of its drivers in 2019.

In addition, Antonio made six FP1 appearances for Sauber over the course of the year.

At Sauber, to be renamed Alfa Romeo, in 2019, he would be partnered by veteran racer Kimi Raikkonen, thereby giving Antonio the perfect benchmark, especially on Sundays as the Finn is still clearly enjoying his racing.

The Swiss team made amazing progress in 2018 and there was no reason to believe that this would not continue this year. For his part however, Antonio needed to settle down and prove himself, for in the current climate in the F1 paddock his good looks would only get him so far.

While there were times in 2018 when the C37 was the best of the rest, the C38 didn't carry on where its predecessor had left off. Fact is the team was expecting more, as were we.

However in the three, four, five-way battle that is the midfield, and with Mercedes, Ferrari and Red Bull effectively filling the first six places, there is only so much room for improvement, certainly in terms of point scoring, and scoring points in the first four races was possibly the worst thing that Raikkonen could have done, for it offered false hope.

It's fair to say that the first half of the 2019 didn't go well for Antonio, and while the Italian struggled, making the occasional unforced error - as in China - his cause was not helped by the form of his veteran teammate.

Azerbaijan finally saw Antonio make it to Q3, however it would be Austria before he scored a point.

It was in the second half of the season that he finally began to find his feet, and though it was the ten points won in the difficult conditions of Brazil that made up the bulk of his 2019 tally, it was noticeable that by now the Italian was regularly out-qualifying his teammate. Though the season ended 11-9 in Raikkonen's favour, in five of the final eight sessions it was Antonio who set the qualifying pace at Alfa.

However, while Frederick Vasseur was the first to celebrate Antonio's points finish in Austria, the Frenchman subsequently admitted that he came close to firing the youngster following his unforced error at Spa when he crashed while seemingly on his way to a decent points haul.

While 5th in Brazil is surely the season highlight for the youngster, it must not be forgotten that in Singapore he actually found himself leading the race, going on to finish tenth once the pit stops had ended and 'normality' returned.

Retained alongside Raikkonen for 2020, it will be a make or break season for the Italian, for other than continuing where he left off in terms of responding to his teammate, he must now begin to edge ahead while ensuring there are no more Spa-ilke errors.