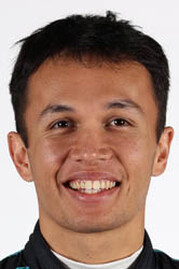 Though born in London, Alexander Albon has taken the nationality of his mother, and will therefore become the first Thai driver to race in F1 since Prince Birabongse, a member of the Thai royal family who raced for Maserati, Gordini, and Connaught in the 1950s.

With the encouragement of his father, Nigel, a former racing driver who participated in the BTCC and Porsche Carrera Cup, Alexander began in karts in 2005 at the age of 8 at the legendary Rye House track in Hoddesdon.

In 2012, having been recruited to the Red Bull Driver Programme, he made the switch to single-seaters, contesting the Formula Renault 2.0 Eurocup series with EPIC Racing. At the end of a tough season, things got worse when he was dropped by Red Bull.

For 2013 he joined KTR in order to contest Eurocup Formula Renault 2.0, finishing the year 16th (of 36), his best result coming at the Red Bull Ring where he took pole and posted the fastest lap of the race.

He remained with KTR in the Eurocup Formula Renault 2.0 for 2014, finishing the season third overall despite not scoring a single win.

In 2015 he made the move up to European Formula 3 with Signature, finishing the season seventh overall, with two pole positions but still without a win.

In December 2015, Alexander took part in a post-season GP3 test with ART Grand Prix and subsequently signed to drive for the French team, alongside Nyck de Vries, going on to finish runner-up to Charles Leclerc with four wins.

Staying with ART, for 2017 he moved up to F2. However, a mountain-bike accident left him with a broken collar bone which compromised his season, and caused him to miss the Baku weekend, and at season end he was tenth.

Remaining in F2 for 2018 he switched to DAMS, a quartet of wins, three poles and seven podiums seeing him finish the season third overall.

Having agreed to drive for his Nissan e.dams in Formula E 2018/2019 alongside Sebastien Buemi, Alexander was subsequently linked with a move to F1 and Toro Rosso, and on 26 November it was confirmed that the youngster would partner Daniil Kvyat.

Like Kvyat, predecessor Brendon Hartley, and many others, Alexander had first-hand experience of how hard and unforgiving Red Bull and Helmut Marko can be. The youngster would need to start proving himself from the outset.

While Gasly was having his own problems at 'the big team', Alex got off to a dream start, out-qualifying the Frenchman in Melbourne and Bahrain, and scoring a point in only his second race.

Unfortunately, it all went a little pear-shaped in China, when he crashed in FP3 and consequently was unable to take part in qualifying. Nonetheless, he finished 10th on race day which went some way to making up for it.

That said, over the course of the season Alex had more than his fair share of accidents in the opening practice sessions, and while one could be kind and suggest that he was 'exploring the limits', it is something he will need to work on, for other than causing extra work for his crew and putting more pressure on himself in qualifying and the race, he has a certain Mr Marko looking over his shoulder.

After Monaco, where he finished 8th, it was Germany where he next scored a point, the Thai, like several others, benefiting from the changeable conditions which caused even the very best of them to make mistakes.

Heading into the summer break with a tenth in Hungary, Alex, who just 12 months earlier seemed destined to miss out on F1, was promoted to 'the big team' to replace a disappointing Gasly.

On his maiden outing for Red Bull, Alex scored an impressive 5th, and over a run of seven races actually out-scored his illustrious teammate, Max Verstappen, by 68 points to 54.

Though regularly out-qualified by Verstappen, Alex usually came into his own on Sunday, though one wonders if this could have been better were it not for his incidents earlier in the weekend.

The fairy-tale looked to be complete in Brazil when Alex was on his way to third, however, a ridiculous move by Hamilton saw the youngster spin out and eventually come home 14th. Though the world champion apologised profusely, it's doubtful that it made up for the disappointment of missing out on his maiden podium - especially as it would have meant an all-Honda affair.

Retained for 2020, Alex will now have to prove himself. No longer a rookie, the youngster must start to make an impression, which won't be easy when you consider what he's up against.

In 2019 we were blessed in the sense that all three rookies were not only clearly talented but also came across as 'nice guys', with Alex one of the nicest.

However, at a time Hamilton was showing himself to be every bit as remorseless as Michael Schumacher, and Leclerc and Verstappen were single-mindedly staking their claims to the title, Alex has to dispel the belief that nice guys don't win.

Apart from anything else, Mr Marko will be watching from the wings. As he always does.