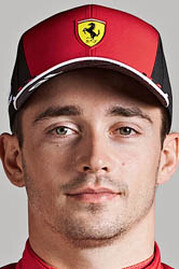 Monaco-born Charles began racing at the age of 5, though it was a couple more years before he started to do it seriously.

In 2009, he was French Cadet champion before moving up to the KF3 class in 2010, when he won the Junior Monaco Kart Cup.

Leclerc graduated to the KF2 category in 2012 with the factory-backed ART Grand Prix team, winning the WSK Euro Series title, as well as finishing runner-up in the CIK-FIA European KF2 Championship and the CIK-FIA Under 18 World Karting Championship.

For 2014 he made the switch to single-seaters, contesting the Formula Renault 2.0 Alps championship with Fortec Motorsports. Over the course of the season he took seven podium positions, including a double victory at Monza, to finish runner-up in the championship behind Nyck de Vries.

Charles also won the Junior Championship title at the final race of the season in Jerez, finishing ahead of Russian teenager Matevos Isaakyan.

In addition he also took part in a partial Eurocup Formula Renault 2.0 season with Fortec as a guest driver. In the six races he contested he finished on the podium three times, taking a second place at the Nurburgring followed by a pair of second-place finishes at the Hungaroring.

In 2015 he contested the FIA Formula 3 European Championship with Van Amersfoort Racing. Finishing fourth in the championship, courtesy of 13 podiums, including 4 wins, Charles also picked up 'rookie of the year' award.

Bringing a strong season to an end, the Monegasque finished runner-up in the Macau Grand Prix

In December 2015, Charles took part in post-season GP3 testing with ART Grand Prix and Arden International. In February 2016, Charles was confirmed at ART, the youngster subsequently winning the title in the season finale in Abu Dhabi, despite crashing out in the feature race.

2016 also saw Charles inducted into the Ferrari Driver Academy, as the youngster followed the path taken by his great friend Bianchi. At the same time it was announced that he would act as development driver for both Haas and Ferrari.

As part of his role as development driver, Charles participated in the first practice session of the British Grand Prix for Haas, thereby making his F1 debut. A few days later he drove the Ferrari on the opening day of the mid-season test at Silverstone, ending the day fourth quickest.

It was widely believed that should Charles win the GP3 championship - which he did - he would follow Daniil Kvyat and Valtteri Bottas straight into F1, albeit with Haas. However, team boss Guenther Steiner made it quite clear that this would not be the case, and that the youngster would move up to F2 before F1.

Joining Prema Racing, it's fair to say that Charles dominated the inaugural F2 championship, the youngster winning the title with three races remaining.

That said, the fact that his 9 podium visits included 7 wins tells a story, for when it went right for Charles it went very, very well. However, there were many weekends when it didn't and rarely due to the youngster.

Whether he was the innocent victim of rivals' over enthusiasm, poor reliability or even technical infringements, Charles didn't have it easy, nonetheless he won the title in style giving a number of superb performances right up until the final race of the season.

As well as his F2 commitments, Charles had driven the Ferrari at the mid-season test in Hungary and the Sauber in the post-season tyre test in Abu Dhabi. This in addition to his four FP1 outings with the Swiss team.

On 2 December, at a press conference outside Milan, following weeks of speculation, Charles was confirmed as Marcus Ericsson's teammate at Sauber for 2018, the Swiss outfit now in partnership with Alfa Romeo.

Many believed that a strong performance in 2018, when he would have access to the latest-spec Ferrari engine, would lead to a works drive with the Maranello outfit in 2019. They were proved correct.

From the outset there was something noticeable about Charles compared to his rivals. It wasn't his obvious speed, nor his infuriating boyish good looks. No, it was his ability to 'fess up' to each and every mistake he made.

As we have seen so many times before - think Vandoorne - drivers can look as though they have it all only to fall apart as they take that final step up to F1. Charles faced that that same, steep, Eiger -like, unforgiving learning curve... but he dealt with it.

The first few practice sessions, qualifying sessions and races were punctuated by calls of "my fault", "sorry" and "I pushed too hard" as the youngster found his feet... and the limits.

Though teammate Ericsson scored the team's first points, and out-qualified Charles at the first couple of races, it finally all came together in Baku.

Having made it through to Q2, Charles survived next day's mayhem and brought the Sauber home in 6th. Though, Azerbaijan can be relied up to produce 'freak' results - and 2018 was no exception - Charles kept it together when other far more experienced drivers were making needless mistakes.

No doubt, Baku was the turning point, and by the time the circus pitched up at Paul Ricard, Charles was ready for the next step, getting the Sauber through to Q3. Though he finished tenth in the race, his performance was noticeable for the way in which he held off the clearly faster Haas of Grosjean, the Frenchman not the sort of driver one usually says no to.

As if we weren't aware, in Russia, just days after being revealed as Vettel's teammate at Ferrari in 2019, Charles served clear notice that he had arrived, a storming first lap seeing him get ahead the likes of Ocon, the Monegasque going on to finish 'best of the rest'.

OK, an engine upgrade had benefitted not only the works Ferrari team but also its customer teams, but that only goes so far in explaining some of Charles' late season results.

In the Japanese and American races he was forced to retire due to accident damage; at Suzuka there were clashes with Magnussen and Ericsson, while in Austin he fell victim to that man Grosjean.

However, he concluded the season with not only a string of Q3 appearances, but three successive sixth places, including Abu Dhabi where he cheekily took on the Red Bull duo at the start.

At season end he was 13th in the standings with 39 points - while his far more (F1) experienced teammate Ericsson was 17th with 9. Though, at Ferrari, Raikkonen had raised his game, having taken a pole at Monza and a very popular win in Austin - the Italian team opted to promote Charles to the A-Team alongside four-time champion Vettel.

Such was the Maranello outfit's obvious faith in the youngster you would have to go a long way back in the history book to find a less-experienced driver being signed, the Italian team traditionally opting for proven winners, if not champions.

At a time Vettel appeared to have lost his mojo, it was going to be interesting to see if Charles' arrival caused the German to raise his game, or, as was the case following Ricciardo's arrival at Red Bull in 2014, to look elsewhere.

Worryingly, for the German, in the post-season test in Abu Dhabi, Charles - driving the Ferrari - topped the timesheets, 0.362s quicker than the four-time champ.

Was the writing on the wall?

Ahead of the season, (new) team boss, Mattia Binotto confirmed that four-time world champion, Vettel, would be given preference, and in the opening race Charles was warned not to overtake the German. The Monegasque complied and finished 5th, less than a second behind Vettel.

Two weeks later Charles claimed his first ever F1 pole, and looked set to be converting that into a race win until a power unit (electrics) issue cost him dear, nonetheless he finished a strong third, half-a-minute ahead of his teammate.

At a time it was easy to forget that Charles was only just out of his rookie year, the youngster reminded us when he crashed out in Q2 in Azerbaijan. His miserable response from his damaged car sounding like a guilty schoolboy.

Sadly, there was another mistake in Monaco, his home race. Already compromised by a dreadful strategic call from the team which saw him eliminated in Q1, come race day the red mist descended. His admirable, but doomed to failure, zealousness was understandable, but when his car was irreparably damaged following a clash with Hulkenberg, Charles had only himself to blame.

Those couple of mistakes aside, it was a very, very, very impressive season, especially when one considers the added pressure of driving for a team like Ferrari.

The shortcomings of the SF90, particularly in terms of downforce, meant that both drivers struggled. However, after the disappointment of Monaco, Charles put together a run of four podium finishes. Among these was Austria, where the youngster was given a gentle nudge by Verstappen as they battled for the lead in the closing stages of the race.

The last lap incident, which saw the stewards deliberate for several hours before declaring it a racing incident, did not go down well with Charles, who said that the Red Bull driver's actions had set a precedent.

After the summer break, Charles put another impressive run together, a run in which he claimed four successive poles and back-to-back victories at Spa and Monza.

Winning at the ultimate drivers' circuit was one thing, but winning Ferrari's home race was quite another, a win that will be etched on the hearts of the tifosi for many years to come.

Ironically, while Charles was on his way to Monza glory, fending off the dual attacks from the Mercedes pair, teammate Vettel was struggling down in 13th, having spun on the opening lap and then compounding his error by hitting Stroll as he rejoined the track.

Unfortunately - not for the first time - there were questions concerning the legality of the Ferrari engine, and despite the team's assurances that all was above board, no sooner had the FIA begun issuing a string of technical directives than performance began to drop off... at an alarming rate.

While there were podiums in Russia and Abu Dhabi, the fact that Charles finished fourth - albeit 52s behind race-winner Bottas - in Austin, tells you pretty much all you need to know.

Missing out on third in the championship by 14 points, Charles still finished ahead of his illustrious teammate, 24 points to be exact.

On 23 December, the tifosi were given the perfect Christmas present when Ferrari announced that it had agreed a new contract with Charles that would keep him at Maranello until the end of 2024.

Leaving Vettel out of the equation - after all the German has his own issues to worry about - Charles will be hoping that Ferrari gives him a competitive, legal car from the outset.

Though clearly talented, the one flaw in Charles is his sense of entitlement, his belief that Ferrari should appreciate that he is now the de facto team leader.

That said, isn't that self-belief, that overbearing arrogance in their confidence of their own greatness that sets legends apart from mere mortals.