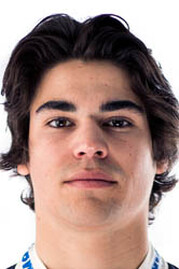 Lance, the son of Canadian billionaire investor, and collector of vintage Ferraris, Lawrence Stroll, began his motor sport career - as they so often do – in karts, the youngster enjoying success in his native Canada and North America.

Nominated by the Federation de Sport Automobile du Québec as Rookie of the Year in 2008, that same year he also won the Coupe de Montreal Championship and was crowned Canadian Champion the same year. In 2009 he won Driver of the Year.

In 2010 he won no fewer than four titles in the Florida Winter Tour, in the Canadian ASN Championship and the Coupe de Quebec.

2010 also marked the youngster's recruitment to the Ferrari Driver Academy (FDA), at 11, the youngest driver to enter the Maranello program.

“We are pleased to welcome Lance to our group,” commented FDA boss Luca Baldisserri. “He is very young, but he has already shown in karting that he is exceptionally talented. We will follow him step by step in his forthcoming events in North America and he will soon also take part in our courses at Maranello.”

In 2011, now competing with the Dino Chiesa Team in the Italian Kart Championship, Lance finished eighteenth in the WSK Euro Series and ninth in the KF3 class championship.

In 2012, he continued with the team and won the Las Vegas Trophy, also finishing fourth in the WSK Masters, fifth in the World Championship CIK-FIA, eighth in the Euro CIK-FIA and twelfth in the WSK Euro.

In 2013, Lance competed in the KF category in the CIK and WSK championships once again with Chiesa Corse team and was recognised as the best rookie.

In 2014, still only 15, he made the switch to single-seaters, winning the Italian Formula 4 Championship.

The youngster concluded a hectic 50-race season by making his debut in the Macau Formula 3 Grand Prix.

In November, Lance was confirmed as a member of Williams Young Driver Development Programme.

"We have identified Lance as a promising talent for the future and we are happy to provide our support to his development as a driver," said Claire Williams. "We look forward to working with Lance in 2016 and to the success he can achieve in the future."

Lance remained with Prema in 2016 to contest the Euro F3 Series for a second season, though he began the year by finishing 5th in the Rolex 24 at Daytona in a Ford Chip Ganassi Racing entered Ford EcoBoost Prototype to become the youngest highest-placed overall finisher in the history of the event.

In Euro F3, Lance took eleven wins and claimed the title in the second race at Imola, over a hundred points clear of his main rival, Maximilian Gunther.

On 3 November, following weeks of speculation, Lance was confirmed as Valtteri Bottas' teammate at Williams for 2017.

"2017 is going to be a big learning curve for me," he admitted, "but I'm eager to absorb everything Williams can share with me so that I improve.

"I'll be taking things on a race-by-race, lap-by-lap basis and hopefully progress with experience like I did when I entered Formula 4 and then Formula 3.

Though Lance is keen to dismiss claims that his drive was bought by his father, reputable sources claim that while his seat is not a 'pay drive', Lawrence Stroll has paid around $80m ($64) preparing his son for the F1 grid.

The youngster then went on a test programme at a number of race tracks including Monza, Hungary, Austin, Barcelona, Abu Dhabi and Silverstone in a 2014 Williams with a crew that included 5 Mercedes engineers - two of the German manufacturer's engines having been purchased in the process - and twenty other staff members.

Despite his age, ahead of his debut, Lance Stroll had spent more time and driven more miles in an F1 car than any 'rookie' before.

As it happens, despite the best efforts of some to cover it up, Lance's 'private world championship' continued for much of 2017, the youngster shunning the simulator for the opportunity to drive current tracks albeit in an old car.

At the end of his first full season, the jury is still out as far as Lance is concerned. While some see him as a kid who is able to play F1 for real thanks to his dad's money, others see him as a potential star.

Sadly, in his debut season, there was no real benchmark by which to judge him as his teammate, for much of the time, was going through the motions. Put it like this, Felipe was never going to put up the sort of resistance to Lance that Sergio Perez offered Esteban Ocon.

It wasn't until the fourth round that Lance got to see the chequered flag, while it was his home race (round 7) that he scored his first points.

On the other hand, he followed that result with a podium finish in Baku, which although somewhat fortuitous, was more than either Force India driver managed.

While there were a number of needless incidents, it was his qualifying performance that really caused concern, the youngster still appearing to struggle at season end.

After a wild start to the season which echoed his antics in F3, he soon settled down and it became noticeable that he excelled in difficult conditions, his qualifying performance in Monza being a prime example.

While Baku saw the points, there were some stand-out performances, most notably Canada, where he remorselessly worked his way through the field, Italy and Mexico.

However, there were too many weekends where he didn't impress, didn't appear to learn, and let's not forget Abu Dhabi which eventually became a glorified test session.

With a rookie teammate for 2018, Lance would either rise to the occasion or not, and while Paddy Lowe would try and guide the youngster one could not help but feel he would have benefitted from more time alongside another Massa-like veteran. Like many, as far as Lance was concerned, Pitpass reserved judgement.

It is said that on the first morning of pre-season testing, Williams knew the FW41 was a dud. Worse however, is the fact that the team soon became aware also that there was no way things were going to improve, such was the wide range of issues with the car.

Consequently, in many ways it is unfair to judge the performance of the Grove drivers who were aware from the outset that they had a rubbish car that was never going to improve.

That said, having spent a season alongside veteran Felipe Massa, Lance had the opportunity to show that not only had he learned from the Brazilian but that he had the ability to make some improvements to the car.

However, while on paper Lance earned six times as many points as his teammate, for much of the season Sirotkin kept him honest.

Out-qualified 13-8 by the Russian, thereby starting 19th or 20th for eleven of the races, Lance made is all the harder for himself on Sunday afternoons. However, as in his debut season he showed an uncanny knack of making great starts. Indeed over the course of the season he passed more cars on the opening lap than any other driver, which suggests that had he started from 15th or 16th...

Unfortunately, these lighting starts didn't always work out, Lance getting a drive-through in Austin for a clash with Alonso which eliminated the Spaniard, just two weeks after a similar clash with him in Japan.

At those tracks where the various shortcomings of the FW41 weren't as noticeable - and these were few and far between – Lance briefly shone, passing Alonso on the final lap to take 9th in Baku - scene of his debut season heroics - and leading Sirotkin home at Monza for the Grove outfit's only double-points finish of the year.

All-in-all however, Lance didn't impress, especially his one-lap pace in qualifying. Nonetheless, with the aid of his billionaire father for 2019 he headed to Racing Point to partner Sergio Perez.

The Mexican would be an entirely different kettle of fish compared to both Massa and Sirotkin, and it would be interesting to see how both reacted to one another, what with Perez still seeking to attract a big team yet not wanting to blot his copybook with his new bosses, while Lance had to prove that his father wasn't wasting his money.

In view of the Grove outfit's great history, ahead of the 2019 season it was hard to believe that we were actually suggesting that Racing Point would be a serious step up after Williams. Yet sadly that was/is the reality.

Free of Vijay Mallya's legal issues and the money worries that went with them, it remained to be seen whether Racing Point could pick up where its predecessor left off, and hopefully punch even further beyond its weight.

However, such was the state of the team in the aftermath of Mallya's mismanagement, that it began 2019 with what Andy Green described as a "vanilla car".

"We did what we needed to get the car out for launch," he told reporters, "but in the background we have always been working on the car for the first race, trying to find the maximum performance we can and bring to Melbourne."

Even the Silverstone-based outfit would admit that the points scored in the opening three races were down to luck more than judgement, however, the double-points finish in Baku was deserved, the circuit clearly one that Lance is comfortable on.

Sadly, at that point the team disappeared into obscurity, encountering one anonymous race weekend after another, and while Perez experienced the longest points drought of his F1 career, in the mayhem of the Nurburgring, Lance scored his best result of the season, coming home an impressive 4th. The Canadian was the first to take the brave gamble to switch to slicks at one stage and as a result actually got to lead the race for a few short laps before losing out to Verstappen, Vettel and Kvyat in the closing stages.

Ironically, it was in Germany that the team introduced its first significant upgrade, not that race day's difficult conditions allowed it to shine.

In the races that followed further upgrades appeared, yet while Perez began a run of nine races in which he scored points in eight, Lance was only to score points on two further occasions.

One area where the team was sadly lacking all season was qualifying, with Perez only making it to Q3 on four occasions and Lance once, on average the Canadian starting Sunday afternoons from 16th on the grid. As in previous seasons, single-lap pace, i.e. qualifying, is the youngster's Achilles heel, and while some determined drives, decent strategy and some particularly strong starts helped out on race day, Lance's poor performance on Saturdays meant he was always up against it.

No doubt Perez will be looking to ramp up his performances in 2020, and providing Racing Point can give him the necessary equipment the Mexican certainly has the talent.

Lance, on the other hand, has to raise his game considerably, especially on Saturdays.

Since entering the sport, on a couple of occasions he has given glimpses of his talent, however, these are all too fleeting. Even if it is Daddy's team, Lance must now begin to establish himself, and prove that his place on the grid isn't all about the backing he has.