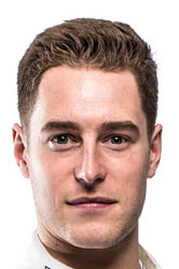 Stoffel's motor raing career got underway at the age of 6 in 1998 at Flanders Indoor Karting. Over the next ten years he gradually draduated through the ranks, and by 2008 was rascing with the Belgian VDK Racing Team winning the Belgian KF2 Championship.

The following year Stoffel contested the World Series Karting, European and World Cup KF2 Championships, finishing runner-up in the latter. In addition, he joined the prestigious RACB National Team, going on to add another championship win to his collection.

In 2010, aged 18, he made the switch to single-seaters, contesting the F4 Eurocup 1.6, part of the World Series by Renault, and winning it at the first attempt with six wins and three podium finishes.

2011 saw him move up to the Eurocup and NEC Formula Renault 2.0 with Kurt Mollekens KTR team. After a difficult start of the season, he finished P5 in the Eurocup and 3rd in the NEC championship. Though there were no wins, he managed two poles in the NEC and eight visites to the podium.

He contersted both championship again 2012, though switching to Josef Kaufmann Racing. While winning the Eurocup, scoring four wins and seven podium visits, he could only manage ninth in the NEC despite winning five races.

For 2013, having joined the McLaren Young Driver Programme, Soffel took another step up the ladder, contesting the Formula Renault 3.5 series with Fortec taking the seat vacated by 2012 champion Robert Frijns.

He won the championship by ten points, finishing the season with four wins, 3 poles and 2 fastes laps, as he put it "another vital year and an invaluable vital step to his ultimate focus - Formula 1 World Champion!"

He didn't get to drive the car until the Barcelona test that followed the Spanish Grand Prix, then again at the Silverstone test.

At season end, as McLaren frustratingly dithered over its 2015 line-up, Stoffel drove the car on both days. Unfortunately it was the Honda powered car and over the course of the two days managed just 5 laps.

Having finished runner-up in the GP2 championship, it came as no surprise when Ron Dennis, at the height of the speculation over his 2015 line-up, added to the mix by hinting that Stoffel was under consideration.

On December 11, after weeks of speculation, the team finally confirmed Fernando Alonso and Jenson Button, with Kevin Magnussen retained as test and reserve driver. However, the Woking outfit was eager to make it clear that Stoffel would continue with the team as test and development driver.

Contesting the GP2 series with ART Grand Prix, Stoffel was on superb form. Seven wins and nine other podium visits secured the title as early as Sochi, the Belgian finishing a staggering 160 points ahead of runner-up Alexander Rossi.

In mid-October, Kevin Magnussen was informed - by email, on his birthday - that his services were no longer required at McLaren, thereby leaving Stoffel as test and reserve. Indeed, in early January it was revealed that the Belgian would be the team's sole representative at a scheduled wet test at Paul Ricard, albeit in the dreaded 2015 car.

As the F1 season got underway, Stoffel revealed that - calendar permitting - he would spend much of 2016 contesting the Japanese Super Formula series.

In the wake of Fernando Alonso's crash in Melbourne, just days before the Bahrain Grand Prix weekend the decision was taken to rest the Spaniard.

Consequently, Stoffel was called back from Japan to deputise for the two-time world champion, the Belgian youngster reading the McLaren-Honda 'instruction manual' on the flight to the middle east.

That he qualified twelfth - ahead of Button who started 14th - speaks volumes, but next day he went one better, finishing tenth and thereby becoming the first driver to score a point for the Woking team in 2016. At the same time, the youngster became the first reserve driver since Sebastian Vettel (2007) to score a point on his debut.

Finishing fourth - the highest placed Honda driver - in a Super Formula series that witnessed two wins, at Monza Stoffel was announced as Fernando Alonso's teammate at McLaren for 2017.

There was already a lot of respect for the youngster in the F1 paddock following his emphatic GP2 Championship in 2015. His performance at Bahrain a year later only enforced the feeling that in Stoffel we had a potential champion. Indeed, having emulated Vettel's feat in terms of scoring on his F1 debut, one wondered what the Belgian might be capable of if McLaren-Honda got its act together. Sadly it didn't.

As early as pre-season testing it was clear that Stoffel and his team was facing a difficult year, though not how difficult.

Such was the weakness of the package - the Belgian and his teammate picking up 23 penalties between them - Stoffel never really got the chance to show what he can do. Though, Alonso, fired by an understandable rage, was able to dig deep, Stoffel clearly wondered what on earth he had signed up for.

Consequently, while there were memorable, though usually unrewarding, moments for Alonso, most weekend were fairly anonymous for Stoffel.

That said, in Singapore he gave a good account of himself, raising the bar even higher in Malaysia. On the other hand, Spain and Monaco will be weekends the youngster will prefer to forget.

In qualifying he was trounced 16-3 by his experienced teammate and this was clearly an area he needed to focus on, and while, given the equipment it would be difficult (and unfair) to judge Stoffel on his maiden season he did appear to improve as the year progressed.

In the sincere hope that McLaren took a significant step forward in 2018, it was going to be interesting to see not only how Stoffel learned from the experiences of his debut season but how he set about getting to terms with his teammate.

Indeed, the facts are pretty devastating. Though only the Mercedes pair and Vettel had better reliability, Stoffel scored just 12 points to Alonso's 50, scoring in three races compared to the Spaniard's eight.

Meanwhile, in qualifying, he was out-classed by the Spaniard at all 21 races, failing to make it into Q3 on 15 occasions. Indeed, for five races he qualified last.

Like Alonso, Stoffel's season got off to a point-scoring start – albeit aided by the double DNF suffered by Haas - followed by further points in Azerbaijan. However, there followed a long, lean, point-less period which lasted until his final scoring result of the year in Mexico.

The numerous weaknesses of the MCL33 particularly hit Stoffel, but even a new chassis, and demands for assistance for him from his teammate, had little effect.

While it was obvious that Alonso had had enough and wished to call it a day, rather than retain Stoffel, McLaren opted for an all-new line up for 2019. However, whether the current limitations of the Woking team will compromise Lando Norris in the same way remains to be seen.

In the meanwhile, Stoffel, surely totally disillusioned with F1 by now, heads off to Formula E, though he has been given a simulator role at Mercedes.

Like many before him, Stoffel appeared to have it all during his progress through the lower formulae, but was left wanting when it came to the final step up to F1.

How much of this is down to the shortcomings of McLaren-Honda and then McLaren-Renault, we will never know, though that 21-0 qualifying score-line tells a tale in itself. In Alonso, the Belgian had the ideal benchmark, however, he came nowhere near measuring up.