Pirelli: Tyre not to blame for Kvyat's crash 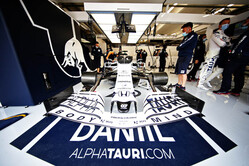 When Daniil Kvyat went off into the barriers at Maggots during last Sunday's British Grand Prix, the Russian immediately jumped to the conclusion that he was responsible after making a mistake.

However, it was subsequently revealed that on a day tyres were to provide all the late drama, the AlphaTauri driver had suffered a tyre issue.

Following an investigation at its Milan HQ, Pirelli has now revealed that the cause of the Russian's off was down to the wheel rim not the tyre.

"A separate mechanical issue led to the inside of the right-rear wheel rim overheating," said the Italian manufacturer in a statement.

"This in turn burned the bead of the tyre and as a result, the bead was no longer able to seal the tyre onto the rim.

"This is what caused the subsequent deflation, with the tyre itself playing no part in the cause of the accident."

The resultant safety car following Kvyat's crash saw all but Romain Grosjean pit, and it was the attempt to run the remaining 40 laps on one set of tyres that was to cause issues throughout the field.