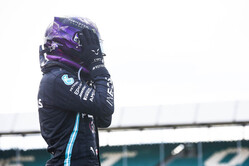 The Briton was seemingly cruising to victory having led from the moment the lights went out to signal the start. However, in a nail biting finale, no sooner had Carlos Sainz suffered a puncture to his front-left as his Pirellis gave up after 39 laps, than Mercedes teammate, Valtteri Bottas suffered a similar fate.

While the Briton enjoyed a lead of over 30s to Max Verstappen, who had now inherited second from Bottas, the Dutchman had pitted for fresh rubber and was now hunting him down.

And at that point Hamilton also suffered a puncture.

The gap visibly closing, somehow Hamilton, now essentially running on three wheels somehow got to the flag just 5.856s ahead of the Dutchman.

"Up until that last lap everything was relatively smooth sailing," said the Britain at race end. "They tyres felt great. Valtteri was really pushing incredibly hard. I was doing some management of that tyre; he looked like he wasn't doing any.

"When I heard that his tyre went I was just looking at mine and everything seemed fine and the car was turning no problem," he continued, "so I was thinking "maybe it's OK".

"Anyways, those last few laps I started to back off and then just down the straight it just deflated. I just noticed the shape just shift a little bit. And that was definitely a heart-in-the-mouth kind of feeling because I wasn't quite sure if it had gone down until I hit the brakes and you could see that the tyre was falling off the rim.

"And then just driving it, trying to keep the speed up, because sometimes it will come off and break the wing and all these different things and oh, my God, I was just praying to try to get it round and not be too slow.

"I nearly didn't get it round the last two corners. But thank God we did. I owe it to the team. I think ultimately maybe we should have stopped towards the end when we saw the delaminations," he admitted.

Asked how he maintained his cool in the circumstances, he said: "You'd be really surprised, well you may or not be surprised, but I was really chilled for some reason at the end...

"Bonno was giving me the information about the gap, I think it was thirty seconds at one stage, and it was coming down quite quickly, and in my mind I was thinking "how far is it to the end of the lap". But the car seemed to turn OK through Maggotts and Becketts thankfully.

"I got to 15 and that's where it really was a bit of a struggle and I could hear the gap coming down from 19 to 10 and I remember giving it full gas from 15 to 16 and the thing wasn't stopping, so I got to the corner with a lot of understeer and then I heard him go, nine, eight, seven and I was like "just get back on the power and try to get the thing to turn".

Team boss, Toto Wolff subsequently admitted that in the wake of Bottas' failure, and with that 30s advantage over Verstappen after his stop, the team had considered pitting Hamilton just moments before his puncture.

"It was exactly the discussion we had with the pit wall," said the Austrian, "are we pitting or not. We had the gap, enough gap to Max, but it was only one lap to go so the decision that was taken was not to pit.

"Everything looked fine at the stage," he continued, "we saw Lewis' tyre was in a better state than Valtteri's and it still looked a little bit random and then obviously everything unfolded, the picture of Sainz on the screen and then a few moments later we saw Lewis with the puncture.

"In hindsight, afterwards, probably a pit stop would have been better," he admitted, "but at the end we don't know the root cause of the failure. It could also have been debris.

"A newer tyre would have had more integrity and rubber and probably protected better against debris, so we will learn from that and probably pit if the tyres are in a bad condition."

While almost all the drivers were complaining about their tyres, it was only Mercedes that witnessed both its drivers suffers the same fate, suggesting the W11 is harder on its tyres than it rivals, however Wolff cites the fact that his two drivers were pushing to the limit.

"Valtteri was complaining about heavy vibration that almost went to a point that his vision was heavily impacted," said Wolff. "Certainly they were pushing each other, maybe a little bit beyond what we would have wanted as a team, but I guess you need to let them race.

"We warned them the tyres needed to make it to the end, they were both aware that they could lose P1 or P2 with a failure, and they're very experienced, so it's down to their decision once they got all the input from us.

"I don't want to interfere," he insisted. "We can't say to Valtteri 'back off and let's cruise home' and we didn't do that."