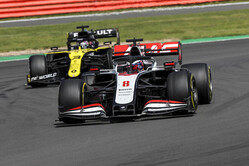 Romain Grosjean has been officially warned after stewards deemed the Haas driver moved under braking while battling with Daniel Ricciardo.

Starting the race from 17th on the grid on new mediums, by the end of the opening lap he was up to 14th. When the safety car was subsequently deployed following Daniil Kvyat's crash, the Frenchman was the only driver who didn't pit - Alex Albon having stopped on lap 6.

Consequently, when the dust settled the sole remaining Haas driver was running 5th.

However, as he continued on his mediums he became increasingly vulnerable as rivals including Carlos Sainz and Daniel Ricciardo sought to re-establish their 'true' positions.

In his efforts to hold off the Spaniard and the Australian, Grosjean - a director of the Grand Prix Drivers' Association remember - performed a number of questionable moves, causing both of his rivals to question his tactics.

Shown the black and white flag for unsportsmanlike behaviour, the Frenchman was summoned by the stewards at race end in relation to an incident involving Ricciardo.

The stewards reviewed video evidence and heard from both Grosjean and Ricciardo and their team managers.

The stewards reviewed that particular case with Grosjean and Ricciardo and also reviewed the video of their incident which involved the Haas driver moving under braking in Turn 6.

Grosjean explained that in both cases his moves were before the braking zone, although in the second case, it was closer.

When it was put to the drivers that these were late moves in relation to the approaching car, or "Movement in Reaction", and also potentially dangerous, they agreed on this as a general principal.

Ricciardo agreed that this situation, while close, was manageable by him as the following driver.

The stewards therefore issued a warning, with the admonition that late movement in reaction to drivers following is also considered potentially dangerous and will be scrutinised.