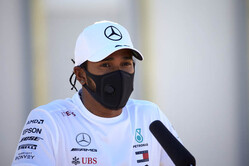 Despite the ever-tumbling records, we know from experience that there are some weekends when Lewis Hamilton simply cannot get it together, and when the Briton spun off in Q2 while trying to close the gap to his teammate there were fears that this might turn out to be one such weekend.

However, in Q3 the Briton posted two of the fastest laps ever witnessed at the Northamptonshire circuit and took pole by 0.313s. Business as usual.

Speaking afterwards, Hamilton admitted that following his off he needed to do a mental CTL, ALT, DEL.

"It really wasn't a nice qualifying session for me," he said. "We'd made some big changes overnight, we went out in FP3 and the car was actually feeling... night and day difference probably for everyone with the wind change, and the track temperature change... and the car was feeling pretty good.

"But the easy thing is to stay where you are and just leave it and hope for the best, but we're always, as I said, looking to move forwards and so we made a couple of subtle changes, and it was worse and you're stuck with that once the qualifying starts.

"So, I had this inconsistency with the balance of the car and I was struggling and obviously I got into Q2, had that big snap and spin - which is my first spin in some time.

"Luckily the tyres were fine," he continued. "We came in, I got to go back out on another fresh set, which was fine, but then it's just really trying to recompose yourself and get yourself back in line because it's really just building blocks when you go through qualifying.

"And that was probably the hardest turnaround, I would say, knowing that Valtteri had just been putting in quick lap after quick lap.

"So to go into Q3 with a kind of fresh reset mentally, and putting in those two laps, yeah, I feel great. But Valtteri's been pushing me all weekend. He's incredibly quick here, so I think I had a tenth-and-a-half advantage to him after the first lap and I knew that he would pick up some pace in that second run, so the pressure was still on to go out and do better.

"This track is just awesome," he added, "because, as you know, with a gust of wind, you have a head wind, a tail wind, a cross wind in different parts of the circuit. It's like juggling balls whilst you're on a moving plate, at high speed.

"Qualifying is a lot about confidence building, as you know, and damn, I had that spin. I was already down, I was struggling through the first section every lap and I don't know how but with some deep breaths I managed to compose myself and Q3 started off the right way. It still wasn't perfect the first laps but still a really clean lap and the second one even better. It never gets old for sure."