"We have been struggling massively," admits Leclerc 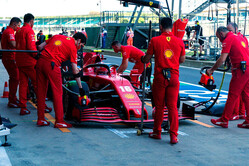 "Today's free practice resulted in mixed fortunes for Scuderia Ferrari," declared the end-of-day wrap from the Maranello outfit on Friday, in a masterpiece of understatement.

And while Leclerc's times may offer a ray of hope for the Tifosi, who were warned earlier this week that it will be 2022 before the team can realistically challenge for wins, Leclerc admits that the team is struggling for race pace - not what you want to hear when the season continues here next week.

"The race pace we have been struggling massively, so we definitely need to work on that," said the youngster. "The qualifying pace is a bit better than what we expected to be honest. This is good.

"We've taken quite a radical approach with our downforce level," he continued, "so it seems to pay off in qualifying, but it doesn't in the race, so we need to analyse the data, and see what we'll have to do tomorrow.

"We can still change quite a lot of things," he added, "so we'll try to understand what we can change to maybe sacrifice a bit more the qualifying pace to be better in the race."

Asked, based on Friday's running, how he might fare come race day, he said: "The balance was extremely hard to drive and very, very difficult not to do a mistake.

"We definitely need to change something on that," he admitted. "Otherwise doing that many laps during the race with this balance will be a huge challenge."

"It was a disrupted day," added Vettel. "We had an issue with the brake pedal and we had to stop and fix that, so a bit difficult to get into a rhythm.

"I think overall, still little bits to learn from and take away for tomorrow. I think we need to improve the car. We'll see where we are tomorrow."

Like Mercedes, the German is hoping for cooler temperatures for the remainder of the weekend.

"I think the track should be in a different state, it should cool down, so we'll see if that really happens.

"I hope that we come up with something. I think on my side, a lot of it will calm down naturally overnight, and we'll have a better day tomorrow."