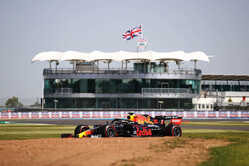 As expected it is hot - at least for this little corner of England - and it's going to get a lot warmer, with nary a drop of rain expected over the course of the entire weekend.

The big news is that Sergio Perez is to miss this weekend's race after testing positive for the virus. With just under thirty minutes before the green light Racing Point has yet to confirm who will replace him, though the smart money is on Nico Hulkenberg.

In its efforts to close the gap to Mercedes, Red Bull will be trying a lot of new parts today, as, no doubt, will a number of others... including the Black Arrows.

As the timing monitors fire up, 'PER' is still showing.

At which point, the cameras pick up on Hulkenberg - sporting full Racing Point kit - running into the team's hospitality unit. The German, of course, had to undergo his own teat for the virus before being the all-clear to replace Perez.

"I was on my way to the Nurburgring for another racing project when the call from Otmar came," reveals the German. "That was less than 24 hours ago, so it feels a bit surreal for me right now, but I like a good challenge and this is certainly one.

"It's obviously a difficult situation for Racing Point and Checo. He's a buddy of mine, an old team-mate and I wish him a speedy recovery. I'll step in and try do the best I can for the team!"

The lights go green and Raikkonen leads the way, followed by Sainz and Vettel.

The Mercedes pair are also early risers, along with Norris and Leclerc.

Albon heads out, his Red Bull sporting a large sensor at the front.

Less than five minutes in and all but Kvyat, Verstappen and Hulkenberg have been out, a mixture of all three compounds. Next week's race will see the drivers use a step softer compound.

We say Black Arrows, but a close up in the garage reveals the car to be sporting a very, very, very dark green sparkly paint job.

Sainz' McLaren is also sporting an interesting sensor arrangement at the front.

Thirteen minutes into the session and Hulkenberg heads out, sporting a black, carbon helmet.

Team boss, Otmar Szafnauer has revealed that the German has 45 minutes in the team simulator this morning.

Unfortunately, nobody appears to have told F1 about the driver change as PER is still showing on the timing screens, though no sector times are being registered.

Meanwhile, Raikkonen posts the first time of the weekend, the Finn crossing the line at 1:32.661.

As Raikkonen improves to 31.554, Norris is the second driver to post a time, the Briton stopping the clock at 30.035.

Verstappen heads out, the Dutchman complaining that he is unable to move his head properly due to an issue with his headrest. Nonetheless, he posts a 30.364.

Twenty-two minutes in and Kvyat is the last driver to join the party.

No sooner has Norris(mediums) improved to 29.439, than Verstappen (hard) goes quickest in the first two sectors, though a yellow flag causes him to back off in S3.

The yellow was down to Raikkonen who had spun off into the gravel at Luffield.

Shortly after, teammate Giovinazzi has a spin at Beckets, the Italian dramatically flat-spotting his tyres. We say dramatically because such is the damage to his rears that the entire car is vibrating.

Though he makes it back to the pits, he has shed rubber and bits of turf on the track and as a result the session is red-flagged.

In all honesty, the Italian should have probably parked up, and could well face censure.

Prior to the red flag, Verstappen had gone quickest (19.192), ahead of Norris, Ocon, Ricciardo and Gasly.

The Mercedes pair and Vettel are among the seven drivers yet to post a time.

"We have detected something wrong with the intercooler system on Seb's car," reveals Ferrari, "so we have to strip the car down and check, to be ready for FP2."

Not the start Ferrari or Vettel were looking for.

The session resumes with 50 minutes remaining. Stroll heads the queue at the end of the pitlane, with Verstappen, Norris and the Mercedes pair also keen to get back to work.

The stewards announce that the Giovinazzi incident will be investigated after the session. The incident being his decision to continue and thereby leaving debris on the track.

However, Verstappen, on hards, goes quickest in S1. He maintains the pace in S2, finally crossing the line at 28.875 to go second.

Bottas subsequently backs-off in S3 having gone quickest in S2.

However, after exceeding the track limits at Stowe Ricciardo has his time deleted.

A 29.661 sees Grosjean go 11th on the softs, as teammate Magnussen heads out on the red-banded rubber.

As he posts 29.600 to go ninth, HUL finally appears on the timing screens as opposed to PER.

As the Haas pair enjoy a clear track, they are eventually joined by the Mercedes pair, Verstappen and Stroll. The Briton on mediums, the Finn on hards and the Dutchman trying the softs for the first time today.

Hamilton consolidates his top sport with a 27.896, but moments later Verstappen crosses the line at 27.422.

A slight mistake at Club sees Albon only manage 28.129, which is still good enough for fourth.

Norris really having to battle a McLaren that clearly doesn't appreciate being told what to do. The MCL35 is sporting a generous amount of flo-vis as the team seeks to understand the issue.