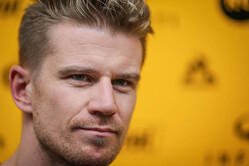 There is increasing speculation that Nico Hulkenberg is to be called on to replace Sergio Perez at Racing Point in this weekend's British Grand Prix.

The German left F1 at the end of last season after losing his seat at Renault to Esteban Ocon. Prior to joining the French team in 2017, he had spent four seasons with Force India.

From 178 starts the German never made it to the podium - a record for the sport - but scored two 4ths with the Silverstone-based team.

While it was assumed that Racing Point would call on one of Mercedes two reserve drivers - Stoffel Vandoorne and Esteban Gutierrez - to replace Perez, who has tested positive for the coronavirus, speculation in the paddock is that Hulkenberg is the team's preferred option.

With the UK government insisting on a 10-day quarantine period for all those suffering the virus, Perez will miss next weekend's 70th Anniversary Grand Prix also.

Currently, Vandoorne is preparing for the Berlin Formula E finale, which takes place next week. The Belgian last drove in F1 in 2018, before being dropped by McLaren, while Gutierrez last raced in F1 in 2016 with Haas.