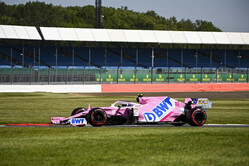 Ahead of today's second practice session, the air temperature is 34.7 degrees C, while the track temperature is 49.1 degrees. It remains hot and sunny.

Max Verstappen set the pace earlier, Mercedes clearly struggling in the conditions. With much cooler temperatures expected tomorrow and Sunday however, one should not start writing off the chances of another Black Arrows 1-2 just yet.

Lance Stroll was third quickest, behind Hamilton, but ahead of Albon, Leclerc and Bottas, as Racing Point continues to impress.

Nico Hulkenberg, standing in for Sergio Perez, was an impressive ninth, just 0.5s off his teammate's pace.

Other than a multitude of new parts, Red Bull spent much of the morning sporting sensor gates as the Austrian team seeks to deal the RB16's unpredictability.

Another team running a number of updates and looking to get to the bottom of its car's unpredictability was McLaren, where both drivers were over 1.5s off the pace.

One driver who will be keen to get to work is Vettel who was sidelined by an intercooler issue earlier and failed to post a time.

Up on the pit-wall, it's interesting to note that despite his best efforts, Norris' spectacles (yes, spectacles) are misting up as a result of his face mask.

The lights go green, but it is almost five minutes before a driver (Ricciardo) emerges, the Australian sporting the hards. Shortly after, Kvyat follows, also on the white-banded rubber.

Ricciardo gets proceedings underway with a 1:30.518, as Grosjean, Giovinazzi, Magnussen and Raikkonen head out.

As Kvyat posts a 30.849, Ricciardo's Renault looks a real handful as it struggles for grip.

Vettel heads out on hards, as Grosjean goes quickest with a 30.279.

Giovinazzi raises the bar slightly with a 30.046, only to be demoted by his Alfa teammate who posts 29.324.

A spin for Leclerc at T4, the Monegasque losing the end as he applied the power while exiting the corner.

15 minutes in and as the Bulls emerge we have yet to see the Mercedes duo.

As Verstappen goes quickest (28.390), Hamilton and Bottas head down the pitlane.

As Sainz is warned of strong cross winds, it seems this could have been a factor in Leclerc's spin.

On the hards also, Hamilton improves to third with a 28.251, not a bad lap under the circumstances. Meanwhile, on the mediums, Bottas improves to 27.731.

"Is there something loose?" enquires Vettel, in a voice eerily similar to Sir Laurence Olivier in Marathon Man. "Is it safe?"

The German heads back to his garage, gets out of the car and starts rummaging in the bottom of the cockpit.

The two AlphaTauri drivers have the track to themselves, until Gasly decides to pit, reporting understeer at Turns 13 and 15.

After thirty minutes, Bottas is quickest, ahead of Albon, Hamilton, Verstappen, Leclerc and Giovinazzi. Hulkenberg is currently ninth.

Albon heads out on fresh softs, as do Giovinazzi, Stroll, Raikkonen and Grosjean.

Raikkonen goes third with a 28.159, as Stroll goes quickest in S1. Despite a small mistake he maintains the pace in S2, finally crossing the line at 27.274.

Though quickest in S1, Leclerc struggles in the next two sectors, finally crossing the line at 27.570 to go third.

The Mercedes pair head out on fresh softs. With the German team show its hand or wait until tomorrow's cooler conditions.

Verstappen is clearly unhappy - an understatement - after being impeded by a slow Grosjean. While the Haas driver is on his out lap, Verstappen is on his flying lap.

"He did that on purpose," says Grosjean, "so childish, so childish." Verstappen's comment is a little more 'fruity'.

Oh dear, Albon has gone into the barriers at Stowe. The session is red-flagged.

The youngster loses the car, appearing to carry too much speed, and clouts the barrier side-on, damaging both the front and the rear of the car.

The session resumes with 35 minutes remaining, Bottas leading the queue of eager beavers at the end of the pitlane.

Seemingly Vettel has a problem with his pedals, which are currently being changed. Clearly, that was the "something loose" to which he previously referred. Bad news for a driver who has only completed 8 laps over the course of the day.

Vettel is back on track, hopefully for some meaningful lappery.

The German can only manage 28.860 which puts him 18th, the Ferrari appearing to be affected by the wind in a couple of corners.

Sainz reports that his tyres are overheating. Indeed, a number of drivers are experiencing similar issues.

The drivers are now into the race sims, and despite the concern over tyre wear they are aware that it will be a lot cooler over the next couple of days.

Of course, their cause isn't helped by the wind which has picked up.

"Take some front wing out, it's so on the nose," reports Verstappen when told to pit.

A brilliant slo-mo shot of Leclerc sliding the Ferrari, the right-rear oscillating violently. "It's so, so difficult," he says of the conditions.

Vettel does an exploratory lap before heading back to the pits.

Ricciardo, currently ninth, has been running a number of upgrades, mainly around the bargeboard area, while Ocon is running the old parts for comparison purposes.

Sainz complains of blistering and switches from the softs to the mediums.

Bottas is told that he is on the same pace as Verstappen on the mediums.

No disrespect to Stroll but his timesheet topping lap was all about timing, the youngster posting his best time just before Albon brought the session to a halt. A number of drivers who were set to improve were forced to abandon their laps.

Onboard with Vettel shows just how bad the Ferrari is, it clearly isn't working for him.

Hamilton reports a "lot of heat coming from the cockpit".

The session ends, no doubt to the relief of all involved... not least Latifi, who on the cool down lap has a big spin at Stowe.