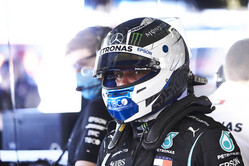 Ahead of today's sole practice session the air temperature is 19.4 degrees C, while the track temperature is 29 degrees. As expected it is cooler than yesterday with a lot of big, fluffy white clouds.

The red flag brought about by Alex Albon's crash yesterday meant that a number of drivers failed to post a competitive time on their qualifying sims, so we still don't have a genuine idea of the true order here.

That said, the heat and wind caused a number of drivers to struggle, not least world champion, and local favourite, Lewis Hamilton.

Daniel Ricciardo has had his chassis replaced overnight after his team discovered a hairline fracture to the original chassis, while McLaren is so pleased with the performance of its upgrades that it is keeping them on the car.

The lights go green and Norris is first out, followed by Grosjean. Both are on mediums.

More drivers head out, including Kvyat who has a 5-place grid penalty after his team changed his gearbox. The Russian is the first driver to head out on softs.

The install lap completed, the drivers head back to the pits.

Vettel heads out, the German having had a thoroughly miserable day yesterday, missing all of FP1 with an intercooler issue and much of the second session due to a problem with his brake pedal. Teammate Leclerc admitted that he was "struggling massively" for pace.

Gasly complains that his braking is "a bit strange".

Vettel posts the first time of the day, a somewhat conservative 1:29.562.

Meanwhile there is a flurry of activity in the Red Bull garage where Albon's car is up on its stand and being stripped down to the basics.

The 'ES Restricted Area' cordons are in place amidst suggestions there was some sort of panic as the Thai driver was about to head out.

Raikkonen goes quickest with a 28.261, albeit on the softs. He is subsequently demoted by Sainz (28.261) who is on the mediums.

Sixteen minutes in and a number of drivers head down the pitlane, among them the Mercedes pair.

Norris asks if his teammate encountered any over/understeer.

Leclerc goes quickest in S1, clearly the best sector for the SF1000 as we saw yesterday.

Norris goes third (27.938) on the mediums, before being demoted when Hamilton stops the clock at 26.825 on the softs.

"There's a vibration in these tyres," says Hamilton, "quite a big vibration."

Twenty-two minutes in and Stroll heads out for the first time, leaving Albon and Verstappen as the only 'no shows'.

While Magnussen, Kvyat and Hulkenberg have been out, they have not yet posted times.

Hamilton consolidates his top spot with a 26.568 as Gasly goes third with a 27.432. The Frenchman is on mediums.

Stroll asserts himself at Racing Point as he posts a 27.350 to go fourth and in the process demote his teammate.

Hamilton retakes the top spot with a 26.332, the Briton making full use of his cool-down lap.

While Leclerc is currently seventh, teammate Vettel is down in 18th as his miserable weekend continues.

On old softs, Verstappen goes quickest in S1, going on to post a PB in the second sector. At the line he posts 26.588 which leaves him still third, albeit 0.256s off Hamilton's pace.

Vettel heads out on fresh rubber, but his first flying lap is compromised almost from the outset as he runs a little wide in Village. He subsequently posts 27.251 to go fifth.

A mistake for Leclerc also, who gets it wrong at Aintree and aborts the lap.

As Leclerc begins another flying lap, there are some worrying dark clouds in the distance. Hey, it might be summer, but this is England.

PBs in all three sectors see Leclerc improve to fourth (26.771).

Ooh, a nasty, nasty twitch for Vettel in Beckets, the German doing well to hold it all together.

With 16 minutes remaining, we've yet to see Gasly or the Haas pair on the softs.

On fresh rubber, Hamilton goes quickest in S1, however, like Vettel, he twitches in Beckets suggesting there's a nasty crosswind. He backs off.

No such problems for Bottas who goes purple in the first two sectors, finally crossing the line at 25.873 to go 0.459s clear of his teammate.

With 14:00 remaining, Albon heads out. "Have a couple of deep breath, get focussed," he is told.

Ricciardo improves to seventh with a 26.841 as Verstappen 26.173 to split the Black Arrows.

However, moments later Hamilton retakes second with a 26.079.

"During the final fire-up we noticed some concerns with the ES on Alex's car," confirms Honda, "and opted to change it for further investigation including the affect from yesterday's crash."