A new chassis for Ricciardo 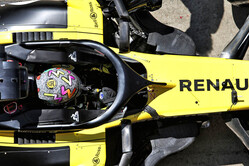 Renault has broken the curfew after discovering a fracture in Daniel Riccardo's chassis and having to build a new car for the Australian.

Finishing eighth in yesterday's opening session and ninth in the second, the Australian was fairly happy with his day's work.

"We showed some promising signs but, on my side, we lacked a bit of consistency in the car," he admitted. "On some runs, I felt happier than others, so we have some work to do there.

"As always, it's pretty close between a group of cars. The temperature is dropping tomorrow, so it should change quite a bit.”

A cut tyre in FP2 limited what he could do in the second half of the session.

This morning, Renault revealed that having discovered a hairline fracture in the chassis it has built a new car overnight.

"Due to a hairline fracture on the chassis in practice yesterday, Daniel will take a new chassis for the rest of the weekend," said the French team. "The team broke the curfew overnight but all is ready for practice today."

Teams are allowed to break the curfew twice over the course of the season, this being the first occasion, race stewards subseqently noting that Renault mechanics had been in the paddock between the hours of 00:00 and 08:00, when the curfew is in operation.

It is unclear if the fracture is related to the damaged tyre.