Ocon did not impede Raikkonen 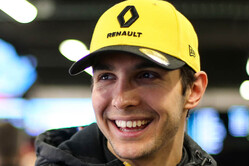 The Iceman complained that he was impeded by the Frenchman in the final stages of Q1 as he sought to improve his time and thereby make the cut.

After the session, the stewards heard from both drivers along with their team representative, as well reviewing video evidence.

Towards the end of Q1 entering the final complex of turns, Raikkonen's car was rapidly closing on Ocon.

In the hearing, Raikkonen stated that because of the position of Ocon's car through Turn 17 to Turn 18 his aero was affected negatively and that he was impeded.

Ocon stated that he was advised of the position of Raikkonen by his team, and prior to entering Turn 16 looked at the relative position. He felt that there was a significant gap. He then accelerated through Turn 17 to start his lap.

Raikkonen felt that by failing to accelerate early enough Ocon impeded him.

The stewards accepted that while Raikkonen's aero may have been affected in his lap, the cars were never close enough, especially compared to previous cases, to constitute "Unnecessary Impeding" which is the text of the regulation.

Consequently they deemed that no further action was necessary.

A similar finding was given in the two cases of "unsafe release" involving Charles Leclerc and Lance Stroll.

In both cases, the stewards felt that, having reviewed the video evidence and previous instances, the situation was not particularly unsafe.