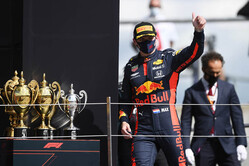 Almost lost in the excitement of the moment, F1 witnessed one of the great radio exchanges as Lewis Hamilton's left-front tyre gave up at the start of the final lap of the British Grand Prix.

"Can we win this," asked Max Verstappen, who had pitted moments after Valtteri Bottas' failure. "If you get on with it," came the magnificent response.

Though he brought a 30-plus gap down to 5.856s, speaking after the race the Dutchman insisted that he had no regrets even though had he not pitted - and he was not suffering anything like the tyre issues his rivals were experiencing - and was only targeting the point for fastest race lap, he would almost certainly have won given what the tyre Gods had in store for the world champion.

"I know everyone is asking whether we should not have pitted for the soft tyre because we could have won but could have, would have, should have..." said the Dutchman. You can always ask these questions with hindsight.

"I don't regret anything," he continued, "and I believe we made the right decision to pit for fastest lap at the end. We did the right thing and who knows if I would also have got a puncture.

"At the end of the day Mercedes deserved to win as they were faster than us, some people are saying Lewis was lucky but he was actually unlucky to get the puncture in the first place and so was Bottas.”

Such was the 'boredom', at one stage the Red Bull driver was heard reminding his engineer to hydrate, echoing the message that drivers are forever being given.

"Other than that I was just counting sheep,” joked the youngster.