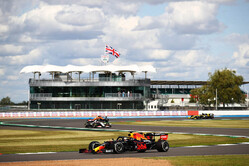 Max Verstappen: "I know everyone is asking whether we should not have pitted for the soft tyre because we could have won but could have, would have, should have. You can always ask these questions with hindsight but I don't regret anything and I believe we made the right decision to pit for fastest lap at the end. We did the right thing and who knows if I would also have got a puncture, you just can't predict these things as it does not happen very often in F1 these days. At the end of the day Mercedes deserved to win as they were faster than us, some people are saying Lewis was lucky but he was actually unlucky to get the puncture in the first place and so was Bottas. I'm happy to finish second as it looked like third was all that was possible and again we have scored good points. I was four or five tenths off Mercedes every lap but a second faster than the cars behind, so it was a pretty lonely race. At one point I went on the radio telling my engineer to remember to stay hydrated. (laughs) Other than that I was just counting sheep! Next week will be slightly different with the tyre choice affecting the strategy and although we are realistic about the pace of the Mercedes compared to us we won't stop pushing them like we did today."

Alex Albon: "Eighth isn't what I want but it's damage limitation after the damage to the car and penalty at the start of the race. I think the incident with Kevin was 50/50, he made a mistake and left a gap so I went for the move. When I realised he didn't see me and he closed the door I tried to get out of the way but we touched. There was a big difference of speed going into the corner and it couldn't be avoided. We had a lot of work to do this weekend but we did the best we could and the race pace was okay fighting back through the field. I'm happy we've got another race here at Silverstone next weekend as I love this track and we can use what we've learned this week and put it into practice."

Christian Horner: "You could say we were a little unlucky to miss out on the victory today but congratulations to Mercedes who have a very dominant car and it would have been a lucky win. Lewis' luck is with him at the moment but second place and fastest lap for Max is still a very good result for the Team after the gap to Mercedes in qualifying yesterday. Max drove a really mature race, he got everything out of the car and made no mistakes - he was even looking out for his engineers and reminding them to have a drink on the pit wall whilst setting green sectors! Towards the end of the race Max's tyres weren't in great shape, so when Bottas had his puncture there was no guarantee Max would have got to the end of the race so it was wise to pit for new rubber.

"I think we have to be grateful to have benefitted from Valtteri's misfortune and we can be happy with this result. Alex also drove a great race and to recover and finish eighth with some great passes, after contact and the resulting penalty put him at the back of the field. I think his collision with Magnussen was a racing incident - Kevin made a mistake and went wide so Alex committed and they touched but the five second penalty was probably fair. From Hungary to here I think we are making progress as a Team and today shows anything can happen in the race, so we must keep pushing and applying the pressure to those in front."