A new race engineer for Albon 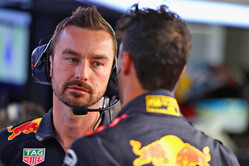 Ahead of the British GP weekend, Red Bull has announced that Alex Albon will have a new race engineer, former Mark Webber and Daniel Ricciardo engineer, Simon Rennie.

"Simon is a highly experienced F1 race engineer, having started his F1 career in 2004," said the team. "He joined Red Bull in 2013 as Mark Webber’s race engineer before working with Daniel Ricciardo from 2014 to 2018.

"He stepped back from a travelling role at the end of 2018 but returns trackside as Alex’s race engineer from this week's Grand Prix onwards, while Mike Lugg - Albon's former race engineer - remains under contract to the team, making the move to the factory.

"As a team we are committed to maximising the performance of the RB16 and our drivers as we continue our championship campaign in this shortened and condensed season."