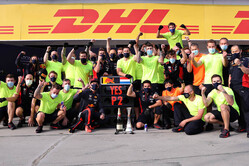 Max Verstappen: "This podium is definitely dedicated to my mechanics. I thought the race was over before it had even started. I braked, locked a wheel, came off the brakes and tried to brake again but went straight on into the wall on the out lap. I couldn't believe it but I managed to reverse out of the wall and get to the grid. As a Team we never give up and the mechanics did an incredible job to fix the car so quickly, I don't think anyone could actually believe they managed it but they all stayed very calm. The track was still pretty greasy but I had a good start. You cannot plan going into Turn 1 but I saw there was a traffic jam on the inside so I thought I would go around the outside where I knew there was grip in the wet and it worked. The race could have been very different if I was stuck in seventh place for a few laps that's for sure. We then made all the right strategy calls and I just had to manage my tyres, be as consistent as possible and manage the backmarkers. To be second here between the two dominant Mercedes cars is an unbelievable result and we did not expect it yesterday after qualifying and such a difficult weekend. We want to try to close the gap to Mercedes, they are really dominant at the moment so it will be very hard to beat them but we won't stop trying."

Alex Albon: "It was a good race and I had a lot of fun with my elbows out. If you had told me we'd be P5 after yesterday I would have jumped at it. Today was never going to be easy starting from P13 but we had a good start and we made our way through the field. It's not easy to overtake at this circuit so we had to do some big moves to get past people. Every move you do is always on the limit here but it worked out for us and I enjoy the battles as it's nice to put on a show. When we fight we tend to come out on top and the car is good on the brakes so it's nice to make these moves. We lost quite a lot of time in traffic today behind the Ferraris otherwise I think we would have been closer but the car was really good and when we were in clean air we were fast and very competitive. I'm happy with the result and it's good points for the Team after such a tricky day yesterday so I think we have to be thankful. Today is a bit of a surprise as to why our race pace is so much better than our quali pace, so we need to understand that, but it's positive and means some things on the car are working."

Christian Horner: "The mechanics did an amazing job today and Max owes this result to them. To get his car repaired in 20 minutes on the grid is incredible and you could see the sweat dripping off them. The guys have been doing an amazing job, especially with the amount of specification changes we've had this weekend, as well as breaking curfew on Friday night. We were obviously on the ropes in qualifying yesterday so to bounce back and split the Mercedes with a P2 here is great. Max drove the wheels off the car and Alex drove a great race too. Considering where he started from on the grid, he put the lap times in and all credit to him as the passing moves he did today made for a great recovery drive. The car is in better shape in race trim and strategically we are sharp but we have updates that aren't behaving as expected, compared with pre-season testing, so we need to go through all the data we've collected and understand it before Silverstone."