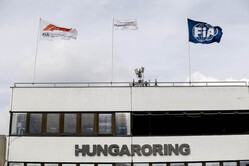 Gentlemen, can I get a quick summary from you about how FP1 went this morning. James, why don't we start with you?
James Aallison: We had a decent morning. We ran all three tyres. Both drivers were pretty happy with the balance of their car and the car looked pretty pacey, so it was a good session.

Xevi?
Xevi Pujolar: For us this morning we had Robert and Antonio in the car. We went through our test programme. The conditions were a bit cold and there is still a bit of work to do, especially with the harder compound and looking forward to FP2 with some changes to improve on the tyres.

Thanks, and Paul?
Paul Monaghan: Not our finest 98 minutes. We still have some work to do. We ran predominantly the softer tyre, which didn't stand up as well as the other two. But Knowledge garnered, improvements to follow and we'll see what P2 weather brings and we'll go on from there.

Q (Dieter Rencken - Racing Lines/Racefans.net) Xevi, obviously the Covid pandemic has affected team budgets etc. Could you explain whether or not it has impacted on the development programmes of your team going forward? Will there be updates coming as regularly as usual?
XP: Yes, despite the conditions of the current situation we keep on with the development, just to fight in the midfield, so on that aspect we will push as much as we can with Corona conditions.

(Andrew Benson - BBC) James, Mercedes has produced another stonking car this year. How do you explain it? What qualities does the team have that make them so much better than anyone else?
JA: Well, we've had a promising start to the year but let's remember we're one track and two races in. I guess we're lucky: we've been a well-funded team, we've been a stable team, we've had strong support from our parent company and consistent leadership. But I think one of the best things about the place is that it has a good culture. And the culture is one of not resting on its laurels, never feeling entitled to the performance we've enjoyed and being willing to pass the challenger of finding improvement in the car down from the top of the team through the layers in the team so that everyone feels a part of making the car stronger, racing the car more strongly, providing us with the environment in which we can make that strong car, all parts of the many-cogged machine that is an F1 team play their part in producing what you see. It's not a single answer; it is down to a team with a good culture in it.

James, Lewis spoke yesterday of the W11 being a more refined car than last year, the best car, he says, you guys have produced. In what areas did you focus your development?
JA: Well, we do the same things we would ordinarily do and what every team in the pit lane does, so we go looking for downforce and horsepower and an ability to look after the tyres nicely, but we have been on a... I hate this word, but we have been on a bit of a journey for three or four seasons now from a quick but very edgy in 2017, understanding why that car was edgy, why it had highs and low and then gradually chipping away, having, we think understood that, chipping away at what is it that made that car edgy and turning the subsequent cars in '18, '19 and now in 20, turning them into weapons that are able to deliver their performance in a much more broad set of circumstances.

Paul, on the subject of Mercedes performance. Are you surprised by the gap to Mercedes this year?
PM: A little bit disappointed is I should think the correct answer as opposed to surprised. It's interesting isn't it? You do your most diligent job with a team of very skilled people and you put your car on the track and you're judged relative to your opposition. In pre-season it looked like we were close, a sniff behind perhaps. The first Austria race wasn't terribly kind to us. All credit to everyone in the team, they pulled together and sorted it out for the next race. OK we're on the podium but we're a little but behind them and yeah it's all work to do now. We have to try to catch them.

Can you put a little more flesh on the bone there? Where did you improve the car from Austria 1 to Austria 2?
PM: Primarily in the aerodynamic area. Clearly there were two reliability fixes applied as well, so they came with a reasonable amount of effort. It's a thing to say 'oh, we'll just fix that', there's no such thing as a 'just' job. So effort went in in all the areas but the performance gains came primarily from the body work.

James, Valtteri said yesterday that he feels confident of remaining with Mercedes next year. Can you explain why, when there is a driver of Sebastian Vettel's calibre on the market, you are not looking at someone like him?
JA: I think Toto has answered this question on a number of occasions but if I can concentrate on our own line-up. Why would we wish to move away from a line-up that has produced such strong results, a respect across the garage between our two drivers that has been evident for all to see and a level of performance from both men that I think many people up and down the pit lane would envy. Why would we want to step away from something that is clearly working and try something else, which is fraught with yes maybe some opportunity, but also lots of bear traps in it too.

(Scott Mitchell - The Race) James, Mercedes have been brought into the Racing Point/Renault protest because it has to provide brake ducts for comparison. Is that just normal procedure and easy to get on board with or is there any frustration about what that sort of request might imply about what Mercedes has done in this case?
JA: No, I think it's pretty straightforward. There's an argument between Racing Point and Renault and in order to settle that argument the FIA need to seek some information from us because the dispute is about what brake ducts Racing Point are running and so we're perfectly happy to provide them with the information they asked for on last year's Mercedes brake ducts.

(Luke Smith - Autosport) James, DAS has been the big innovation for Mercedes this season. Is there any more development you can do with DAS further through this year? How much more can you add to it or have you stopped everything in its tracks as you already have it on the car and won't be allowed next season?
JA: I think that for us it's still a very new system. Precisely how, where and when we get the most opportunity from it is to some degree continuing to be a voyage of discovery for us, and the manner in which we develop it is still open for us as the seasons goes on. So it's not a closed book and we hope to get more from it if we can learn quickly in the coming races.

(Frederic Ferret - L'Equipe) Paul, it's five years that you're worked with Max. In which areas has the driver improved?
PM: Gosh, he won his first race with us, didn't he, so he sets the bar quite high, doesn't he? I think what I've seen from Max is that he's become a more complete driver, so his understanding of the car, the tyres, his racing skill was always a great strength. His pace is phenomenal. I think he's learned how to be a greater contributor to the team and he learned how to work with a very competitive teammate in Daniel and he's learning to work now with Alex, so I think he's just maturing as a person and a contributor to your team. We're blessed to have such an asset.

(Christian Nimmervoll - motorsport.com) Paul, this circuit is very different to the Red Bull Ring in terms of characteristics. Mercedes was quite impressive with their performance in FP1. If this continues for the rest of the weekend and they continue to be ahead by like half a second like they were last weekend, how worrying is that for the remainder of the championship? And vice versa, can I ask Mercedes the same question?
PM: I don't think I would describe this as worrying. I think what it is, is it's set the bar that we've got to develop faster than Mercedes to challenge them for the championship. We can do that, we have done that in the past. Can we do it again? I think it's entirely within our grasp but it also depends on what Mercedes do. So worrying? No. Challenging? Yes, enormously. We'll working with Honda and we'll make the package as good as we can and if that means we can catch the Mercedes, great, and... It doesn't actually change what we're going to do, it more just defines how much we have to catch them by and then it's down to them as well.

JA: I think probably, sort of in the question, is an assumption that this is just an easy cakewalk and I can just say it doesn't feel like that sitting our shoes. In our shoes, we think OK, we went to Austria, a track that we haven't been strong at in the past and we had a decent performance in the second race but we were in a fistfight in the first. And we're now at a second track where we ran on greasy cold asphalt against Red Bull who were clearly not running their engine at the same level of power that we had chosen for that session and the gap looks bigger than it truly is. We're expecting this year to be a fight. We're expecting to have to develop strongly because if we blink we'll be swallowed up. If you want evidence of that, take a look at Friday of the second Austria where we went from looking pretty good in the first Austria to looking worse than average. We were beaten handsomely in free practice on Friday because we weren't paying enough attention and if we don't pay enough attention, either to how we approach each race weekend or how we develop the car through the year, we'll get overrun very, very quickly.

(Phil Horton - Motorsport Week) Xevi, was Alfa Romeo's low key performance in Austria, particularly in qualifying, a one-off or did the car perform in line with expectations?
XP: Yeah, in qualifying, for one lap performance it was worse than what we expected but then I think it's an area we are working to improve. In the race, the pace was better and we were able to fight with the midfield competition so yeah, that's an area that we were expecting more in qualifying and we are working on it.