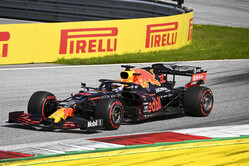 Having been reeled in by Valtteri Bottas with just a couple of laps remaining, Max Verstappen sought consolation in grabbing the bonus point for fastest race lap, however even that was denied the Dutch youngster as Carlos Sainz did the business.

Though delighted to finish on the podium following his team's double DNF in the season opener, Verstappen is concerned at the RB16's lack of pace.

"We were just too slow," he sighed, "we can do whatever we want, pitting early, late or the same, but I don't think it's going to change the end result.

"At the time I thought we were pitting a bit early," he said of the team's strategy which saw him go for the undercut on Bottas, "and I knew of course that towards the end of the race I was going to run out of tyres but yeah, it is what it is.

"I said also on the radio at one point, never mind, just get on with the job," he added.

Though he was able to maintain a constant gap to Hamilton in the opening phase of the race, Verstappen believes the Briton was holding back.

"I think it's more Lewis pace-managing," he said. "Of course, he knows my lap times, that the gap is not closing or growing.

"You could see once you have to push a bit more and you have the tyres to do so, then I'm just a bit too slow."

Passed by Bottas on lap 67, Verstappen subsequently pitted for fresh softs and a bid for the fastest lap, finishing the race 33.6s adrift of the world champion and 19.9s down on his Mercedes teammate. Alex Albon finished fourth, 10.7s down on his teammate.