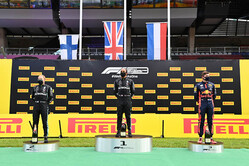 Were this the excellent Internet Movie Database website this report might well have the message "Warning: Spoilers" at the top of the page in bolded red letters.

After all, didn't we have a race here in similar conditions just seven days ago?

Thankfully however, the only spoilers around the Red Bull Ring this weekend were those naughty weather gods who chose to have some fun and games yesterday.

While the rest of us are thankful for conditions that turned qualifying - and hopefully the race - on its head, the likes of Racing Point and Ferrari are likely to feel that their hopes were pretty much spoiled on Saturday.

Determined to make the most of it, the weather gods teased us with changeable conditions, and having eased up slightly towards the end decided to turn on the hose again, and in the process Lewis Hamilton delivered one of the finest laps in living memory.

Toto Wolff rightly described it as being "out of this world", while Lewis, who is not given to self-praise, admitted that it was close to perfection.

While it would be nice to think he might follow it up with Donington '93 today, despite the much improved conditions we could still be in for a classic.

Despite that magnificent lap, Hamilton goes into today's race knowing he will be up against it. Alongside he has Verstappen, the Dutchman still smarting from his retirement last week.

While the Austrian Grand Prix highlighted an electrics issue on the Honda power units, which the Japanese manufacturer is confident it has fixed, Verstappen will be aware of the fragility of the gearboxes on the Mercedes and will therefore push as hard as he can in order to force the Black Arrows to push also... hopefully over those unforgiving kerbs.

Last week's winner, Valtteri Bottas starts behind the Dutchman, while Carlos Sainz splits the pair in the McLaren

Though Norris took a three-place hit for his yellow flag misdemeanour, we can expect the mother of all battles today as the McLarens square up to Renault and Alpha Tauri.

Then there are the Ferraris and the Points, which looked incredibly strong on Friday.

As if that isn't enough we have George Russell starting from eleventh, behind Vettel and ahead of Stroll, while - courtesy of a penalty for impeding Kvyat - Leclerc starts from 14th.

Last week's race witnessed unusually high attrition, and while some of this can be put down to the fact that it was the first race of the year and followed a lengthy shutdown, it is clear that some cars are more fragile than others. Hopefully lessons have been learned over the last seven days.

One team that clearly hasn't learned its lesson is Ferrari. Having brought its upgrades forward it appears that they aren't enough. Of course it was impossible to judge them in yesterday's conditions, but on Friday's evidence alone the team is clearly hurting.

Despite the continued insistence that it's all about the aero, it is clear that the Italian team has never fully recovered from the controversial investigation of its engine last year, and if further proof were needed just look at the pace of Haas and Alfa Romeo.

Verstappen's qualifying strategy last week saw the Red Bull star start the race on mediums, which gave the event some added spice. Thanks to those pesky weather gods this week the drivers have a free choice of tyre so strategy is going to be the name of the game.

The fastest strategy is still expected to be a one-stopper, but with a slightly different look to last Sunday: where the soft tyre in particular proved to be very competitive.

Theoretically, the quickest way is to start on the softs for 28 to 33 laps and then complete the race on the hards.

Almost as quick is a one-stopper with a start on the mediums for 24 to 30 laps, then hards to the finish.

Finally, a two-stopper is definitely slower: two stints on the softs for 24 to 26 laps each, then mediums to the end.

The pitlane opens, and after yesterday's fun and games the drivers are going to want to run a few exploratory laps before taking their place on the grid.

Raikkonen is first out, the Finn, the oldest man on the grid, heading out for his 314th Grand Prix. As expected all the drivers are keen to get out and try their set-ups.

One of the last to arrive on the grid is pole-man Hamilton.

Albon reports that something fell into his cockpit from around his harness.

Other than Leclerc and Norris' penalties, Giovinazzi was handed a 5-place drop for taking on a new gearbox while Grosjean starts from the pitlane after his team worked on his car under parc ferme conditions.

All start on softs bar Ricciardo, Vettel, Kvyat, Raikkonen, Latifi and Giovinazzi who start on mediums.

They head off on the parade lap. All get away with no issues.

While behind him everyone waves in a bid to generate heat into their tyres, Hamilton appears positively relaxed.

Hamilton and Verstappen both get away well, and while the Briton is first into Turn 1, Sainz is alongside the Red Bull. Verstappen holds position forcing the McLaren driver to run wide.

Heading into Turn 3, Sainz is on the outside of Verstappen again, while Bottas is just ahead of Ocon and Albon who are side-by-side.

Further back the Ferraris clash, Leclerc, on the inside, momentarily airborne as he clout the side of his teammate's car. Both continue, but Vettel's rear wing has come adrift.

Meanwhile, Russell is all over the rear of Stroll as the Canadian battles Norris.

The safety car is deployed as Vettel has now lost his rear wing.

Both Ferraris pit, Vettel's car is pushed into its garage his race over, while Leclerc switches to hards.

The safety car is withdrawn at the end of lap 3, as Leclerc asks if the rear of his car is OK.

At the re-start Stroll runs wide as he battles Norris, with Russell also enjoying the scrap as he fends of Magnussen.

A mistake sees Russell runs wide and lose a heap of places in the process.

At the end of lap 4 Leclerc drives into the pits and retires, to compound a dreadful weekend for Ferrari.

Bottas finally gets past Sainz to take third, though he is now 5.7s behind his teammate. Hamilton has a 1.5s lead over Verstappen.