Hamilton: As close to perfect as I could get 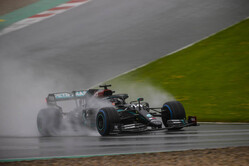 At a time some were questioning where his pace had suddenly gone and others wondered if he was losing focus due to his activism on race and diversity issues, Lewis Hamilton used the treacherous conditions of qualifying at the Red Bull Ring to firmly silence the doubters.

That he took pole was one thing, that he took it from Max Verstappen on his 'home' track another... but to eclipse the Dutchman by 1.216s...

"Honestly, it was a fantastic lap, the last one," admitted the Briton. "I think just the importance of managing your time out there, managing your battery pack, knowing when to use the few laps that you have on the qualifying modes, creating the gap, not making a mistake when it counts. That was a lap.

"Obviously the lap that I had before I think was good enough," he continued, "but that last lap was really as close to perfect as I could get it in those conditions. And considering it was raining more, it makes me even happier knowing that I went a little bit quicker during that time.

"It takes me back to times like Silverstone 2008," he said, "because, when you're really at one with the car and you're not phased at all and how you have to be very dynamic with your driving style from corner to corner because the wet patches arrive, the puddles are shifting about with the cars that are driving ahead of you, which is a massive challenge.

Asked if official were right to allow the session to go ahead in such conditions, the world champion was in no doubt.

"Definitely," he replied. "The officials definitely have a difficult job the majority of the time and particularly on a day like this, knowing when to go and when to choose not to let the cars run - but I'm grateful they did.

"Just as we came to qualifying. Obviously it was drying up - or it wasn't raining for a while - and just as everyone got in the car it started to rain again. And so we obviously had that bit of a pause. But once we got going it was fine for the first session.

"Then it did get worse - but I'm glad that they allowed us to stay out. It was definitely on the limit - but that's racing! I'm glad they didn't take that away from us because today, it's so special being out there, it's so difficult. I don't know how it comes across on the cameras but it is the hardest conditions that we ever drive in. Just one small lapse of concentration and you're off. And it can be big or small. More chance of it being a big one. So, yeah, I'm grateful for that."

Among those left almost speechless by Hamilton's lap was team boss, Toto Wolff.

"Very rarely do you see performances that are just not from this world," said the Austrian. "When you look at the onboard of his lap, he was balancing the car on the edge, aquaplaning, throttle control was incredible.

"I can't remember that I have even seen 1.2 seconds between first and second," he added.

"I think driver and car merge into one, where a perfect car with the tyres in the right window, and perfect driveability on the power unit come together with skill and intelligence of the racing driver.

"Only then do you see this kind of performance."

Asked about the moment when he snapped at his engineer, Pete Bonnington telling him not to talk to him, Hamilton said: "There was one lap that he was quite relaxed and he was like 'well, take this lap to calm down' and I was starting another lap. So I was on the lap and he was trying to talk to me about the next lap and I was like 'Bono, just give me a second' and I was still on that lap.

"It's not easy, definitely, to hear from someone when you're on a pushing lap or when you're cornering because you're so focused on one thing and it can be distracting. But that wasn't an issue."