Vettel: "It's a different car!" 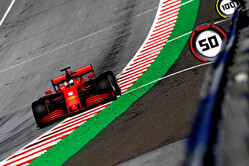 Despite finishing sixteenth in FP2, almost 2s off the pace, Sebastian Vettel insists he is pleased with the changes made to his car this weekend.

Speaking after last Sunday's race, the German said balance issues made the car "unrecognisable" to what he had driven for much of the weekend.

"We had a close look to my race performance in particular which was off compared to the weekend up to that point," he said. "We found a couple of things.

"It's hard to say how much difference those things were making, we had an issue with the brake, maybe something with the damping of the car."

Such was the performance of both cars over the Austrian Grand Prix weekend Ferrari brought its upgrade package - originally planned for Hungary - forward to this weekend, the Italian team running a new front wing and floor.

"If you look at the timing sheet, obviously I got the lap deleted and it was not a great day for lap times," Vettel told reporters at the end of FP2. "Some people anticipated maybe rain tomorrow, and just prepared in case this is the qualifying for Sunday.

"On our side, the main thing was to look after the upgrade that we brought," he continued, "so step by step we were putting stuff on and it seems to be positive.

"We still need to have a look and now find the best window where the car is happiest," he added.

"We tried some stuff, so the usual homework. I tried a lot of stuff on the brakes and I still need to get into a better rhythm, especially after last weekend. But I think felt a lot better already today."

Like McLaren and Renault, Vettel felt the Ferrari suffered most last week at the start of the race when running on high fuel. However, his race sim yesterday was a lot better.

"All day it was straightaway a different car, and I was just able to get at it," he said. "It's not really possible to compare the two because there was such a big difference, and obviously now I hope it stays like this."

While Hamilton is hoping for a dry qualifying, not so his German rival. Asked if he would prefer it wet or dry, he replied: "Probably wet. I think it should increase our chances.

"Let's see," he added. "If it's so wet that nobody can drive, then it's a different wet. But if it's just wet, I think would mix things up."