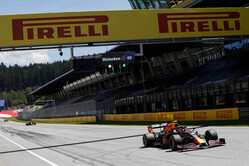 Second-fastest time for Valtteri Bottas (Mercedes) and third-fastest time for Sergio Perez (Racing Point) made it three different teams in the top three. All used the P Zero Red soft tyre to set their quickest laps, as expected.

Today's weather was hot, with track temperatures that peaked at 54 degrees centigrade, but conditions are expected to be very different tomorrow as heavy rain is forecast from the morning.

The teams were able to use their prior knowledge of the Red Bull Ring to improve their lap times compared to last week, with some also trying new parts. The top four drivers in FP2 were faster than the best time in the same session last week.

Last week's race showed that the soft tyre held up well even in warm conditions, with today's running confirming how the drivers were able to push this compound hard - also extending the performance gap between the soft and medium runs.

Mario Isola: "Today was a slightly unusual situation, with the teams practising on a circuit that they had only raced on a few days previously. But it's interesting that the sessions had quite a different complexion to what we saw this time last week. There was an added urgency to FP2, as it's been suggested that these times might count towards the final grid positions if it's not possible to run qualifying as scheduled tomorrow, due to the expected heavy rain. This also made it particularly important for the teams to carry out their race preparations, with conditions on Sunday predicted to be dry, and to set an FP2 banker time in case it was needed in lieu of qualifying. From a tyre perspective, there were no real surprises: everything performed as anticipated and with wet weather likely tomorrow, the teams are expected to have a full allocation of slick tyres for the race, which opens up more possibilities for different strategies."