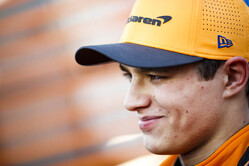 Lando Norris has been handed a 3-place grid penalty for passing Pierre Gasly under yellows during FP1.

The stewards heard from the Briton and a team representative as well as reviewing video evidence.

On-board footage clearly showed that Norris passed the AlphaTauri while yellow light panels were clearly visible and yellow flags were shown, a breach of Appendix H Article 2.5.5.1.b) of the FIA International Sporting Code and the Race Director’s Event Notes.

As a result the McLaren driver, who finished third here a week ago, was handed a 3-place grid penalty and 2 penalty points.