Teams optimistic for the financial future of the sport 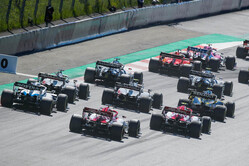 While the pandemic has highlighted the fragility of some teams, indeed the sport itself, moving forward such measures as the budget cap give cause for optimism.

Indeed, recalling the old adage about the best way to make a small fortune from F1 is to start with a big fortune, some believe it is conceivable that in time teams will become profitable, courtesy of, among other things, the cap and the fairer distribution of prize money.

"The teams did an excellent job over the extended winter to address the fiscal nature of the sport," says Zak Brown. "Everyone knows, there was too big of a spread between first and tenth, which then plays itself out, also on track.

"If you can get a sporting franchise that is profitable, then the value of that franchise goes up significantly and so you get asset appreciation.

"I think all of our shareholders love being in Formula 1," he continued. "I don't think they're in it necessarily to turn a profit, but they're also not in it to lose substantial amounts of money, which has been the case for a lot of teams. So I think we've landed in a place where there's a path to profitability. I think that it closes the gap between first and tenth.

"That will put a better product on the track ultimately. The fans win and I think it was a good compromise because the teams that were spending north of the cap have had to make some real compromises and I think that's good because that's going to be difficult and, at the same time, I do think that we have more wealth in the sport from the teams and what some of the teams that I think were at risk of leaving were more about their frustration for being competitive than not being able to afford the sport. So I think we found a good balance and I think Formula One's going to really thrive in the future."

"Our situation is a little bit different," added Toto Wolff, albeit that the shareholders of McLaren seek value on their investment but for us, Mercedes, and also speaking also for our partners, the return on investment seems to be right and Formula One is probably one of the best marketing platforms in the world.

"We're able to generate return on investment of up to twenty times the investment of Mercedes and its partners and our partners, so from a marketing standpoint it has always made sense and does make sense.

"But now there's an additional angle that is being added, but with the cost cap, as much as we would have liked it to stay on a higher level because our organisation runs smoothly and restructuring is always difficult, as Zak referred to, there will be difficulties for us in restructuring but at the same time it leads us to a situation where our P&L will completely change from a deficit - not a big deficit, but still a deficit - it will change to a profitable P&L which is very important for the long term sustainability of the sport.

"We've seen that there are team owners and shareholders in the sport that are in there for the love of the sport and for the marketing return but in order for us to really prosper you need to post a profit like any normal company out there and then more people will be interested in owning teams or with owning part of a share in the Formula 1 organisation itself because it is a solid business kit and we are - as much as it's difficult from the restructuring point of view - we are looking forward to become a profitable franchise."

"Red Bull's involvement in Formula 1... the majority reason for that is to promote its product," said Christian Horner, "because Formula One is a global platform that has viewing figures that are only exceeded by the Olympic Games and the football World Cup which only happens every four years, not every single year.

"So the work that's been done, the collective work, the compromises that were found were very positive to improve the model and the fiscal model of a Grand Prix team, so it just adds greater value for money for the shareholders, for the partners, for the sponsors.

"It gives a financial ceiling for the amount of money that a team can spend, so it allows the teams that are further down the pecking order to converge for that, certainly fiscally and potentially on track as well so it creates, certainly, a more even playing field and I think that in terms of providing value and long term security to the sport, the teams, the entrants, I think it was the right thing and responsible thing to do and I think all teams... we often differ in opinions in many areas like DAS systems... it was for the benefit of the sport to converge and come to a common understanding and compromise was found where it was needed to be."