Norris: I thought I'd fudged it up! 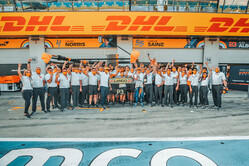 Following his superb drive to a maiden podium, Lando Norris admits that there were several times during an incident-filled Austrian Grand Prix when he thought he'd blown it.

With Lewis Hamilton handed a 5s penalty following his clash with Alex Albon, the race was on for the final spot on the podium, and while the world champion sought to maintain the requisite gap to his rivals, behind Lando Norris was battling with Sergio Perez, having successfully fended off the attentions of his own teammate.

On lap 69 the McLaren youngster virtually barged his way past the Mexican, subsequently posting the fastest lap of the race as he hunted down Hamilton, and while the maiden podium seemed secure Norris admits that he was sure he'd blown it.

"I’m speechless," he declared after the race. "There were a few points where I thought I'd fudged it up a bit... I dropped to fifth with a few laps to go, Carlos was almost going to get past me. But I didn't give up and I managed to get past Perez and ended up on the podium.

"It's a long race," he continued, "but I kept going and kept giving my all, I had a pretty cool last few laps trying to push as much as I can.

"The last few laps, when I had to get past Checo, I knew he had a five-second penalty but nothing more than that," he said of his need to reduce the gap to the world champion.

"I always seemed to struggle when I was close to the cars ahead and more vulnerable to the guys behind. So I knew... not just because of Lewis, because I didn't know at the time (he had the penalty), I just knew I had to try to get past him. And then when the penalty came, I knew I had to turn it up a little bit.

"I am a bit out of breath," he admitted, "but I am so happy and proud of the team. Considering where we were a few years ago to now, I think it's a pretty good achievement, so I'm proud to be part of it."