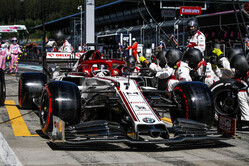 Alfa Romeo has been fined for the unsafe release of Kimi Raikkonen's car, which subsequently lost its front-right wheel causing the Finn to park on track.

In a race of incidents, shortly after George Russell's retirement, which brought out the safety car, Raikkonen pitted.

Rejoining the race still in 12th, as the safety car was withdrawn and the race re-started the Finn's right-front wheel became detached from the car as he entered Turn 9, and subsequently fell off as he exited the turn.

While the errant wheel came to rest in the gravel, Raikkonen parked his stricken Alfa on the pit straight meaning the safety car had to be deployed once again.

After examining photos of the damaged wheel and the axle shaft it was evident to the stewards that the wheel nut of the front wheel got cross threaded during the wheel change which was not identified by the wheel gun operator. As a consequence the right back wheel went off when the car was back in the race.

The stewards accepted that neither the team, nor the driver had the opportunity to realise that the car was in unsafe condition and therefore did not stop the car.

Nonetheless the team was fined 5,000 Euros for releasing a car in an unsafe condition, a breach of Article 28.13 c) of the Sporting Regulations.