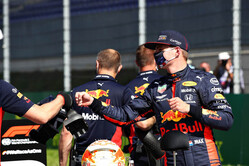 Valtteri, that's race one of 2020 and you've qualified on pole position. What is this like? You've been dreaming about this for a long time and obviously envisioned it - but to get the job done must to nice.
Valtteri Bottas: Yeah, it feels really good. I've missed these feelings, y'know, after the qualifying. Shakes. It's something special, when you push the car to the limit. Obviously been preparing for this for a long time and it feels so good. Can't say more than that. Our team, amazing job. We seem to be in our own league.

And obviously Mercedes have given you a great car. I guess you saw that in the winter but they've continued their progression, and what a gap you've got to your rivals.
VB: It's very impressive to see. It's only the first qualifying of the season but I'm so impressed, so thanks everyone in the team, all the factories. It's a truly amazing car to drive. Obviously, a good result today but tomorrow is what matters.

Lewis, it's on the front row. You've looked in control all weekend but I guess you must be happy with a one-two for Mercedes and you're lining up alongside Valtteri.
Lewis Hamilton: Yes, it's a great job by Valtteri. I mean this is a great start to the season and happy to be here.

And obviously, going into the race tomorrow, Mercedes are in a great position to try and do this but just give us a sense of just how good this team is, given that you've arrived here another year and you look like you're in good spirits and good fighting.
LH: I think we show year-on-year that we continue to be the best team. I think that's because we are open-minded, we are current with the times, the guys that I work with, they're never too stubborn to admit they might be wrong at some stages, and we're constantly always learning from each other and always pushing the boundaries and there's not really any politics within the team, so it's a unit, a united team that we've pushed together. That's why every year we come back. Because that's not necessarily always the same in teams.

And just lastly, seeing it was quite a lot of traffic at the end of that to start that final run there. Was that confusing or did that affect you, your last lap?
LH: No, no, not confusing. I came around Turn Four and I think there was a big puff of dust and I didn't know where the car was or anything like that but I managed to see that Valtteri was just about to come back on the track, and yeah, fortunately it didn't really affect the lap, and he kept his position and so did I. So...

Max, the best of the rest again but lining up tomorrow on the Medium tyre, you must be pretty happy about that.
Max Verstappen: Yeah. I mean, I'm happy first of all to be P3 but also yeah, we have a different starting tyre. It's going to be interesting; it's going to be quite a bit warmer tomorrow, so yeah, I hope that's going to play in our advantage - but clearly today Mercedes was on a different level unfortunately. Let's see how we can do tomorrow.

We're expecting warmer temperatures tomorrow. You came alive last year when it got hotter, you didn't get off-put by the shaky start but you managed to fight to the end. Do you think this Red Bull this year will allow you to attack Mercedes?
MV: Last year we were also a little off in qualifying so I expect we are a bit better in the race. Now, I'm the only one on a different tyre in the top ten, so yeah, I'm just looking forward to it. We have nothing to lose, so I'll try to make it as difficult as possible for them.

Valtteri, many congratulations, what an electrifying session. What a great car. What a lap at the start of Q3. Just talk us through the session.
VB: Obviously the first thing what I said on the interview on the grid was that I've definitely missed this kind of adrenaline rush and the feeling you get from pushing these machines to the limit and, you know, trying to be at your personal peak and concentration and performance. It's so much fun. And I really enjoyed the session. For me, the qualifying was... I finally managed to unlock some performance from myself and from the car for the qualifying. There were certain corners that I sometimes got them right but mostly I was just a bit off. Just throughout the qualifying I managed to build the confidence and found the areas that I was missing and managed to get some good laps and put the pieces together and , just like I said, just really, really enjoyed and just surprised obviously with the gap to the other teams, and it just shows the strength - the amazing strength of this team and it's just so impressive.

Was there more time on the table after that first run in Q3, or was that run the run. Was it near-perfect?
VB: No, I think there was a bit more time on the table. I think I was slightly up on my second lap until I ran a bit wide in Turn Four on the gravel and went off the track. So that was my mistake. It wasn't quite perfect but it was super-close with Lewis, so I'm glad it was good enough.

Lewis, you are half a second faster than the first non-Mercedes car. Just how much confidence does that give you at the start of this season?
LH: Well, we definitely didn't expect to have that gap but it's just a true showing of all the great work everyone back at the factory continues to do. Valtteri did a fantastic job today with his lap and it's amazing. I don't really know what to say. We did not expect to have that sort of gap. We thought we were definitely quick enough to be fighting for the lead - but there were different showings from the other teams: sometimes quick, sometimes a little bit further behind. Yeah, so that's the true showing of our car and we plan to try to improve on that.

And what about your own car during Q3? Were you happy with it?
LH: Yeah, the car was great. Just didn't manage to put the greatest laps together. So, work for myself today and just go back to the drawing board and work harder.

Max, are you surprised by the gap to the Mercedes.
MV: Well, I was not entirely happy with the balance. Some corners were good, some were not, so then the gap can be a bit bigger but still I think, yeah, half a second is quite a decent gap. What can you say about it? We just need to work harder and try to close that. I'm happy that in Q2 I could squeeze a lap on the Medium tyre out, so we're starting with that. Let's see. Maybe tomorrow is a bit warmer; maybe that helps a bit. Hopefully also the race. We've never been the quickest over one lap on this track and hopefully in the race it will come a bit closer. But yeah, I don't know. Still, best of the rest, I's a good start into the season and now we just have to work to close that gap.

Do you think you'll need to do something different tomorrow to stand a chance of beating these guys?
MV: I don't know. I guess time will tell and we'll find out during the race. I've just going to try the best we can from our side and see how the tyres are holding on, and we'll see.

(Christian Menath - motorsport-magazin.com) Question for both Mercedes drivers. Considering the gap you had today, do you expect to fight just between the two of you tomorrow or also with Max with his different strategy?
VB: For sure, race and long runs it's always a different story and we've seen many times that Red Bull has had a good race car and the race depends on so many different things - and we haven't been able to compare any of the teams on longer runs that maybe ten laps - so we didn't take anything... with the mentality that it's going to be easy for us. We are prepared for threat from other teams, not just the two of us, so... and we do expect it.

Lewis, your thoughts
LH: I agree with Valtteri. Not really very much more to say. I think it's going to be a close race still. He's on the medium tyre so a slightly different strategy and they're very quick on race pace - so it should be a lot closer tomorrow, I would expect.

(Alan Baldwin - Reuters) Question for Max. You and Charles had a good battle last year but the Ferraris are way off the pace at the moment - not just Ferrari but the Ferrari-powered teams. I just wondered for your thoughts on that and why that might be.
MV: Well, I guess you have to ask Ferrari about that! The engineers. I don't know, I'm driving with the Honda-powered car so I have no information why that is.

Shall we just get the Mercedes drivers' thoughts on that. Lewis? Ferrari's pace?
LH: Where are they? I don't know.

Quite far back. Sebastian didn't make it through to Q3.
LH:Not expecting them to be that far behind but, as Max said, I don't know what their reasons are, so...

(Scott Mitchell - The Race) Question to all three: how did you find it now that you're leaning on the car again and searching for those last few thousandths of a second. It's a short lap here so everything counts and obviously there was a suggestion that there may be a few people that could be rusty after such a long time off.
LH: It felt great. Honestly the training and rehabilitation work that I was able to do during the period of time has meant that I've come back feeling fitter and back to doing what we do best. It doesn't make qualifying any easier and it doesn't make extracting the maximum from the car any easier but I think it was a pretty solid opening two days.