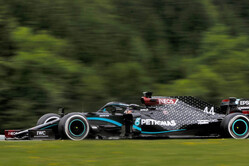 Ahead of today's sole practice session, the air temperature is 22 degrees C, while the track temperature is 43 degrees. Conditions are much brighter - and significantly warmer - than yesterday with 0% chance of rain.

The big news is that Red Bull's protest of Mercedes controversial dual axis steering system has been thrown out, though there are fears that further protests can be expected if Racing Point maintains its Friday form.

While Max Verstappen's lack of pace was put down to the youngster damaging his front wing on a kerb, Charles Leclerc admits that Ferrari's problems are "worse than expected".

This morning's session will allow the teams to prepare further and in the final moments we should get a better idea of the true pecking order, ahead of this afternoon's qualifying session which will either confirm our worst fears or reveal a pleasant surprise... depending on your point of view.

Other than having its device declared legal (again), Mercedes will head into today further buoyed by the fact that in both of yesterday's sessions world champion led a Black Arrows 1-2.

There were a number of spins and offs yesterday, and though there was nothing too serious a number of cars suffered damage to their wings, bargeboards etc. With the heavy schedule the teams face in terms of 8 races in 10 weeks, this is something they need to keep an eye on.

Norris is first out, followed by Magnussen, Kvyat, Grosjean and Gasly. There's a mixture of softs and mediums.

Their install laps completed the five return to the pits, at which point the circuit falls silent for several minutes.

Eventually, Sainz breaks the deadlock and heads down the pitlane. The Spaniard, one of several to incur damage yesterday, is on mediums.

The Ferrari-bound driver crosses the line at 1:06.307 to get the session underway at last.

Despite a poor second sector, Sainz subsequently improves to 6.264.

Fifteen minutes in and the Renault pair head out, like Ferrari, the Renault will not benefit from any engine upgrades for the rest of the season.

Albon and Bottas head out, followed by Hamilton as Sainz gets down to 5.885.

A 5.911 sees Ocon go second, as the Ferrari pair head down the pitlane.

Verstappen (mediums) posts 5.658 to go fourth, as former teammate Ricciardo (soft) looks set to improve. A poor final sector means he can only manage 5.380, which is still good enough for second.

As Hamilton goes quickest (5.140), Albon asks why he is out of sync with other drivers.

Leclerc goes third with a 5.298, as Sainz appears to have sustained some damage.

As the cameras pick up on a significant amount of smoke billowing from Perez' car, the session is red-flagged when Latifi goes off and into the barriers at T1.

Replay shows he ran wide and over the kerb and speared into the barriers which put him into a spin. "I crashed... sorry guys," he sighs.

This is not the start that either the Canadian or Williams needed.

The session resumes with 26 minutes remaining. Hamilton heads the queue at the end of the pitlane, the Briton still running the mediums.

Magnussen improves to 15th with a 6.227 on mediums, as Vettel posts a PB in S1 on softs. He goes quickest in S2 as Leclerc also looks set to improve.

A 4.703 sees Leclerc go top, but like his teammate he is on the softs.

The bottom of the timesheet has a familiar look, with the Williams pair propping up the Haas and Alfa duos.

Talking of Haas, Grosjean is clearly struggling with his car, and runs wide as he remains 1.9s off the pace.

Bottas switches to softs, as the qualifying sims look set to begin. Unsurprisingly the Finn goes quickest in S1, as Hamilton begins his first flying lap on the red-banded rubber.

A 5.037 sees Ocon go fifth, as teammate Ricciardo heads out on the softs.

The Australian posts PBs in the first two sectors, while a third is good enough for sixth (5.088).

And now, with 11 minutes remaining, Verstappen heads out on the softs. Along with his teammate, the Points, McLarens and Haas' he is yet to post a time on the red-banded tyres.

PBs in all three sectors see Verstappen go third, 0.283s off the pace, the youngster losing most of his time in the final sector.

There appears to be an issue with Ocon's car which is up on its stand in the Renault garage.

All eyes on Perez as the Mexican heads out on the softs, the last driver to do so.

Perez posts PBs in all three sectors, finally crossing the line at 4.605 to take fourth, with only the Mercs and Verstappen quicker.

One gets the feeling that the DAS nonsense isn't the last protest the stewards are going to face this weekend.