Seidl "optimistic" for no repeats of Melbourne 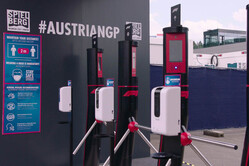 It was around ninety minutes before opening practice in Melbourne that McLaren kick-started the events that were to ultimately lead to the cancellation of the event.

"McLaren Racing has confirmed that it has withdrawn from the 2020 Formula 1 Australian Grand Prix, following the positive test of a team member for the coronavirus," said the Woking team in a brief statement.

"The team member was tested and self-isolated as soon as they started to show symptoms and will now be treated by local healthcare authorities. The team has prepared for this eventuality and has ongoing support in place for its employee who will now enter a period of quarantine."

Since then a further nine races were either cancelled or postponed as the virus took hold globally.

As we head into this weekend's Austrian Grand Prix, McLaren team boss, Andreas Seidl is confident that the various protocols that have been introduced are enough, and that there will be no repeats of the Melbourne fiasco.

"I have to say I'm very happy with the plan that has been developed under the leadership of the FIA," said the German, "it gives us a clear regulation, clear procedure, of how we execute the weekend.

"What is different now to Australia that we have clear concept of isolation, of the teams, between each other," he continued. "We will show up in Austria in these different groups and then separate groups within the team, so the policy is clear.

"If you develop symptoms we will immediately test a team member in the paddock," he added, "plus, for the close contacts as well, the members of this group, we should get the test result within a couple of hours on-site which then allows us to simply make a quick decision for what the next steps are.

"The approach is clear, if someone is positive, they need to be isolated from the team and can't continue, but for everyone else who is negative we can simply keep going.

"We have back up personnel ready here in the UK fully tested as well, simply to be able to cope with different scenarios that could arise.

"It's a virus and as we have seen it can spread quite quickly," he admitted. "But at the same time with all the measures we have in place, all the testing we have before arriving at the circuit, we arrive well prepared, having done what was reasonable to do in order to protect the team from having anyone in the team with the virus.

"We see also in different companies - or countries - you quickly develop hotspots of the virus, then ten, twenty or more people have the virus in a short period of time.

"There's no 100 per cent safety or guarantee," he said, "but at the same time as I said before with everything in place, together with FIA, and other teams, I'm very optimistic that we will have great weekends ahead of us."