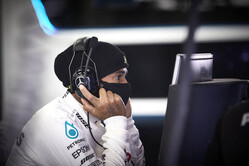 Though Mercedes came away from pre-season testing looking as dominant as ever, it wasn't all plain-sailing for the German manufacturer.

The works team and Williams both suffered reliability issues with their power units, though Racing Point ran trouble-free.

Across the two tests, both Mercedes and Williams required three engine changes due to cooling, oil system, MGU-H and MGU-K issues.

Though a fix was put in place in time for the Melbourne race, the units were barely fired up and having never left the pitlane were officially classified as not being used. Consequently, the season allocation begins this weekend in Austria.

"We have a different spec to Melbourne," a spokesperson told Motorsport.com, "because we have made reliability updates since then.

"They are the product of the time we have been able to work since Melbourne, minus the shutdown," they added, "and we hope they stand us in good stead ahead of this busy opening phase of the season."

In a bid to cut costs for engine suppliers, the technical regulations stipulate that the engine spec used in Austria is the one that must be used for the rest of the season, consequently Mercedes will be hoping that its upgrade does the trick.

Honda is also running an upgraded unit for its two teams this weekend, the Japanese manufacturer having claimed its first F1 victory in 13 years when Max Verstappen took the flag here last season.

"Our personnel observed the factory shut down period both in Sakura and Milton Keynes in accordance with the revised Formula 1 sporting regulations," says technical director, Toyoharu Tanabe. "However, in the time when we were operational, we have moved forward with our development work. Therefore, our PUs for Austria should have better reliability and performance than the ones we took to Melbourne."