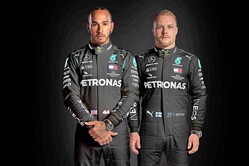 Ahead of this weekend's Austrian Grand Prix, Mercedes has revealed the new-look race suits Lewis Hamilton and Valtteri Bottas will wear for the remainder of the season.

Earlier this week, the German team revealed it was adopting its cars liveries and the drivers race suits "as a public pledge to improve the diversity" of the team and a clear statement that it stands "against racism and all forms of discrimination".

"The call to 'End Racism' will feature on the halo of both cars," added the Brackjley-based outfit, "and the united F1 initiative #WeRaceAsOne will be featured on the mirrors of the W11."

While renderings of the car accompanied the statement, it is only today that Mercedes has revealed the new look its two drivers will sport this weekend.

At the same time, Mercedes-AMG revealed the new look for its official F1 safety car, which will "prominently support the "WeRaceAsOne" campaign by featuring its rainbow key visual on the flanks and on the bonnet of the car".

"The eye-catching design symbolizes the sports commitment for diversity and inclusion," added the German manufacturer.

"When Formula 1 returns to racing this weekend, it will use this opportunity to thank people all over the world for their strength and resilience in the fight against the global COVID-19 pandemic. The sport will also show its unity in the fight against racism and its commitment to do more to address inequality in Formula 1.

"As a sign of this commitment, rainbow visuals and the hashtag #WeRaceAsOne will feature on all Formula 1 cars and around the race track. The rainbow was chosen as it has become a symbol that is used internationally to bring communities together.

"In addition to the "WeRaceAsOne" campaign, the call to "Drive Safely" will be visible on the bonnet the Official FIA F1 Safety Car, addressing fans at home who are watching the race on TV or via live stream and reminding them to always drive in a careful and considerate way.

"Bernd Maylander's ‘company car' also uses the hashtag #PurposeDriven to promote the FIA's commitment to safety, sustainability, gender equality and diversity, and points out the FIA Action for Road Safety with mentions on the roof and tailgate of the car."