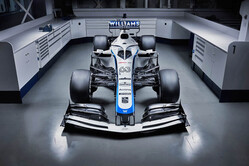 During the shutdown the Grove outfit - Britain's most successful in terms of constructors' titles - announced that it was considering a number of funding options moving forward, including the possible sale of the team.

At the same time it announced that it had dropped title sponsor ROKiT, the telecomms and drinks (!?!) company, with which it had been associated since February 2019. 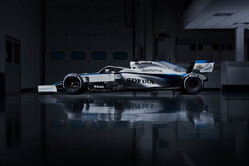 When it was announced yesterday that the team was to reveal a revised livery, it was widely assumed this would mean a return to the 'traditional' dark blue and white, however, other than the absence of ROKiT logos, and consequently the ROKiT red, the revised livery doesn't look very different... though the gloomy studio lighting doesn't exactly help.

Indeed, we've left one of the images (right) exactly as it was presented so you can see what we mean.

Still, the #WeRaceAsOne rainbow should hopefully brighten things up.

The good news is that as we revealed yesterday, the popular Grove outfit appears to have the funding in place to continue racing into 2021, and is feeling buoyant as it looks to the future.