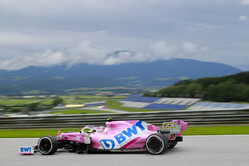 Lewis Hamilton led a Black Arrows 1-2 earlier, ahead of Verstappen, Sainz and Perez.

If you're thinking it's pretty much business as usual you'd be correct, indeed to make us feel at home there's already talk of protests, with Red Bull unsure of Mercedes DAS system, the German team still uneasy about the FIA's handling of Ferrari's 2019 engine investigation, and various parties uneasy about the (t)Racing Point.

Business as usual for Romain Grosjean who was sidelined following a brake issue, while Esteban Ocon missed the final twenty minutes after parting company with his barge board.

Talking of barge boards, along with a new livery, Mercedes was running a new barge board, revised rear wing, cooling geometry and diffuser as well as an upgraded engine.

Unsurprisingly, Grosjean is first out, his Haas sporting the yellow-banded mediums.

The Frenchman gets straight down to business, posting a 1:09.788 as Sainz heads down the pitlane to join him.

Next time around Grosjean improves to 8.351, as Giovinazzi, Stroll, Raikkonen and Norris head out.

While Grosjean gets down to 7.842, Sainz wastes no time in setting the pace, the Spaniard crossing the line at 6.886.

Stroll goes quickest with a 5.469, ahead of Raikkonen, both on the medium rubber.

Grosjean complains of understeer in Turns 1 and 3.

Norris splits the Points with a 5.869, as the Ferrari pair head out, both on hards.

Bottas is the first of the Mercedes drivers to head out, however, after going quickest in S1 he appears to back off in S2.

Magnussen is the first driver to have his time deleted after exceeding track limits, Stroll having suffered a similar fate this morning.

A mistake at T1 sees Kvyat run wide and almost clout the barriers, thereby bringing out the yellows.

Shortly after, Latifi has a similar moment at the same corner.

Bottas posts 5.746 to go third on the mediums, while the Ferrari pair go 11th and 12th on the hards.

Perez goes second to make it a Racing Point 1-2, as Latifi spins at T3.

Leclerc is told that his GPS is not working properly, which means it will be difficult for the team to advise him on traffic.

Another moment for Kvyat who is clearly struggling with the AlphaTauri this afternoon.

After 20 minutes, Hamilton and the Renault pair have yet to post times.

Verstappen goes top with a 5.379, while a 5.534 sees Bottas go third. The Dutchman complains that the volume on his radio is too low.

Twenty-five minutes in and Hamilton heads out. Sporting the mediums his first lap is a 6.129, which is good enough for 11th.

For a few moments Hamilton has the track to himself, but then Ocon heads down the pitlane to join him. No sign of Ricciardo though.

The Briton is advised that the Dutch driver set his best time on his third push lap, just as he is about to begin his third such lap.

Just over half-an-hour in and Latifi is one of the first to switch to the softs this afternoon, as Stroll, Perez, Bottas and Vettel follow the Canadian's example.

His first flying lap sees Ricciardo post 5.815 to go seventh, though the car looked a handful.

It remains to be seen what Leclerc can manage on the softs but rival teams will not have missed the fact that the Racing Point appears quicker than the Ferrari.

A minor mistake in T5 sees Raikkonen take a long trip through the gravel.

Hamilton is told that his "main loss" is T3.

Hamilton, still on mediums, goes fourth with a 5.095. He subsequently pits and takes on a new set of softs.

"What was Bottas doing," complains Stroll, though it is not clear what he is unhappy about, unless it is the fact the Finn has the 2020 Mercedes as opposed to the 2019 version.

Ah, replay shows the Finn making a late decision to pit, just as Stroll was heading to the apex.

With 40 minutes remaining, as the rest are on high fuel runs, Sainz is the first of the McLaren pair to go for a qualifying sim.

His right-front wing oscillating after clouting the kerb at T5, Sainz is told to pit.

Vettel is the first driver to switch to hards as he continues his race sim. Gasly follows suit.

Bottas is told that his front is sliding more than the rears at high speed, as the Finn queries his car's stability..

A lock-up in T3 sees Vettel run wide, the German making full use of the expansive run-off.

Verstappen repeats Raikkonen's earlier mistake in T5, as Hamilton has his latest time deleted after exceeding the track limits at T10.

Albon loses the rear of the Red Bull in T1 which momentarily brings out the yellows. The Thai driver is lucky not to collect Perez who was running close behind.

The race sims continue, and there's a good mixture of the three compounds, though only Vettel, Gasly, Russell and Latifi are on hards.

For the second time today Stroll has his time deleted after exceeding track limits, though the damage he suffered, judging by the vibrating on-board camera, should be punishment enough.

A spin for Grosjean in Turn 3, which leaves the Haas facing the wrong way.

Bottas is told to pit after reporting that his shifting isn't working.

Perez is told that he's quicker than his teammate, and "matching Verstappen".

Grosjean is still complaining, this time it's about "very weird locking".