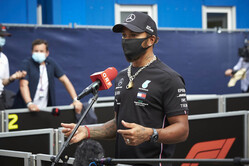 Not for the first time, Lewis Hamilton has had to resort to social media in a bid to deny media claims about his contract dealings with his team.

Heading into the winter the headlines proclaimed that the Briton was seeking a "dream move" to Ferrari, a move which, on reflection, might have proved more of a nightmare had it been true.

As various other claims were made, both Hamilton and Mercedes issued denials that they had disagreed on a number of points, both insisting that talks hadn't even begun yet.

Then, ahead of this weekend's season opener, reports emerged claiming that the six-time world champion is "demanding" £40m a year to sign on the dotted line, a claim the Briton strongly denies.

"So the media keep writing about a new contract and me making demands," he wrote on Instagram. "But I haven't even spoken with Toto about it yet.

"No demands," he added, "the conversation hasn't even begun... so please stop making shit up."

"We are in a position of trust with both of the drivers," Wolff told reporters on Friday. "You could say that in Formula 1 it doesn't mean a lot, but it does in our team.

"I guess that we will do the next steps soon," he added, "but I don't want to commit to any timing because I don't want to answer questions every single race weekend about why the contracts are not done.

"There is no urgency in the matter," he continued. "All of us want to do it and when the time is right, we will announce it."

Meanwhile, Romain Grosjean, who is a director of the Grand Prix Drivers' Association, has said that it is "unacceptable" that some drivers are paid such huge sums.

"We had this talk in the GPDA, some were in favour, others were against," said the Frenchman. "I do think it's unacceptable that Lewis Hamilton earns more than 40 million while some drivers earn 150,000 Euros a year for the same job," he added

"However, what was pointed out was that if we cap drivers' salaries, we break the whole ladder of motorsport," he continued. "Who would invest money in young driver programmes to pay for their racing if they can't get their money back by taking a percentage of the drivers' high wages? That's the debate.

"Personally, I wasn't necessarily against the idea of having drivers' salaries in the budget cap," he admitted. "But then, for sure, you would question what manufacturer or manager would come and spend a fortune on a driver only to take back 20% of something that is capped, so never get their money back."

Of course, those six titles, 84 race wins, 78 poles and 47 fastest laps might have some bearing on Hamilton's financial clout, that and a 'star' quality that goes way beyond the F1 paddock.