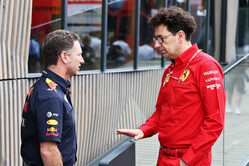 As expected, despite the cancellations, postponements and shutdowns, the bad feeling over certain matters that hung over Melbourne, has continued three months later in Austria.

Red Bull and Mercedes, in particular, remain concerned that following the FIA's investigation into Ferrari's 2019 engine, nobody is the wiser in terms of the findings.

In February, the FIA stirred up a hornets nest when it announced that following its investigation into the engine, which was suspected of exceeding the maximum fuel-flow, its findings were not going to be made public following a private - read secret - agreement with the Maranello team, a move that saw a number of teams subsequently sign a statement demanding answers. Unfortunately, due to the cancellation of the Melbourne event and the subsequent shutdown, the matter was never satisfactorily resolved.

Today, it was clear that the matter still rankles.

"It does sit uncomfortably that there is an agreement that has been entered into about the legality and conformity of a car," said Christian Horner. "That immediately draws you to think 'What is in that agreement? What does it comprise of?' Because obviously a car is either legal or illegal.

"It does nothing but promote suspicion when there are private agreements about legality and conformity," he added. "The healthiest thing would be to get it on the table so everyone sees what it was comprised of. The FIA have said they are willing to do that. It would be great if Ferrari were prepared to do the same, so it puts it all to bed."

"Good governance is extremely important," added Toto Wolff. "It may well have been good governance but if you don't know what happened it's difficult to judge."

This cut no ice with Ferrari however.

"The answer is straightforward," said Mattia Binotto when asked if he was willing to reveal details of the investigation. "It's confidentiality, it's intellectual property protection and that's the reason why we're not keen to it.

"There was no clear breach of regulations, otherwise we would have been disqualified," he added. "The reason we don't want to open is simple, because whatever we need to explain is our IP, intellectual property to our project, to our power unit, and I think no one in the paddock would be happy to release information on their design and their project."

"The position that we are in is that we are monitoring the situation," said Wolff. "We are not happy about last year. It has stretched all of us to a point to be competitive against Ferrari, where it was difficult to cope.

"Let's wait and see how the season starts and get going," he added, "and we will then re-assess for ourselves and probably with the other guys where it stands."