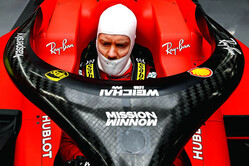 In the statement on Tuesday 12 May announcing that Sebastian Vettel would not be remaining with Ferrari after 2020, team boss, Mattia Binotto said: "This is a decision taken jointly by ourselves and Sebastian, one which both parties feel is for the best.

"It was not an easy decision to reach, given Sebastian's worth as a driver and as a person," he added. "There was no specific reason that led to this decision, apart from the common and amicable belief that the time had come to go our separate ways in order to reach our respective objectives."

However, speaking in Spielberg, the four-time world champion has refuted Binotto's claim, saying that there was no sticking point in the contract offered to him because he had never been offered a new contract.

"It was obviously a surprise to me when I got the call from Mattia when he told me that there was no further intention for the team to continue," said the German.

"We never got into any discussions, there was never an offer on the table and therefore there was no sticking point," he added.

Looking ahead, he said: "Obviously I want to make sure I make the right decision for myself and my future. I think I have a very competitive nature, I have achieved a lot in the sport, I'm motivated and willing to achieve more.

"To do so I need the right package and the right people around me so that's what I'm looking out for at the moment, if the right opportunity should arise then it is quite clear. If that's not the case then I'll probably have to look out for something else."

With the current regulations being held over next year, it is now 2022 when the technical regulations get their overhaul. Asked if he might take a year out in the meantime, Vettel said: "I don't know, I think, as I said, if the right thing comes together and comes up I'm willing to continue as I feel I have much more to give.

"If that's not the case and doesn't come together then as I said it's probably time to do something else," he added.

"But I am of the conviction that if you are prepared to let's say shut the door then you should be prepared to shut that door and not shut it and expect it to open again. You have to be aware of the decision you are making at the time and that's also why I'm not rushing into anything, the next weeks and months will be probably bring some more clarity."