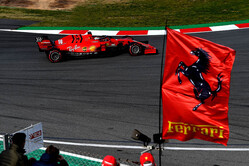 Ferrari is the latest team to take to the track ahesd of the forthcoming season opener at the Red Bull Ring.

While some have gone down the testing route running a 2018 car, others have taken advantage of the rule that allows teams to use their current cars, albeit with the caveat that they are limited to 100 kms.

Ferrari has opted to follow the example of Mercedes and Renault, in running its 2018 car, with Charles Leclerc and Sebastian Vettel sharing duties at Mugello tomorrow (Tuesday).

Last week Leclerc made a promotional run around the town of Maranello is the 2020 car, while for Vettel it will be the first time the German has driven for the Italian team since it was announced that he is to leave at season end.

Mugello, which is owned by Ferrari, is looking increasingly likely to host a round of the championship later this season, probably the week after the Italian Grand Prix at Monza.