Ocon "happy" to have Alonso as teammate 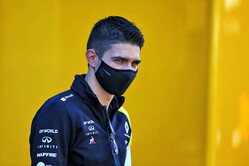 Despite the fact that the current season is yet to get underway, many of the burning questions right now are centred on next season.

Questions such which teams will or will not be around, will Sebastian Vettel retire or take a sabbatical and will Fernando Alonso make a return to the sport with Renault, the team with which he won his two titles.

Speaking in Spielberg, Esteban Ocon, whose current teammate, Daniel Ricciardo is heading to Woking, said he would be happy to have the Spaniard in the second Renault, revealing that it was Alonso who inspired his love for the sport.

"The helmet I have, the only swap I did between drivers, was with him," he added. "He was the one with Michael, his fights back in the day, that gave me the love for the sport.

"I don't know if he's going to join or not with us, but definitely if he could come back, I would be very happy."

Asked his opinion in terms of who he would prefer as a teammate, Alonso or Vettel, Ricciardo replied: "I would only say Alonso, just because it's something I'm yet to experience.

"Teammates are great benchmarks," he continued, "and also great additions to your skill set, you can always learn something. I don't believe there's any driver in this sport that's been perfect yet. There's always an improvement to make.

"For that I would say Fernando," he added, "I only had 12 months with Seb... that went pretty quickly, so I wouldn't be opposed to that again."