"It's time for change," admits Williams 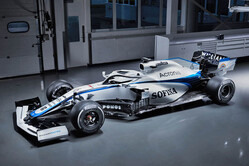 We previously reported that Williams has the necessary funding to continue racing into 2021, and that contrary to some of the more pessimistic speculation in the media the news that the team is looking at a number of options going forward - including selling-up - is not all bad.

Speaking to Forbes, a source insisted that the decision to sell a 75% stake in its Advanced Engineering division, and the subsequent £30m investment from Michael Latifi didn't mean that Williams was on the brink of going out of business but rather part of a deliberate strategy going back to the start of 2019.

"Williams had gone through a very difficult 2018 and was well aware that 2019 had started badly," said the source. "If your pre-season tests and your first races go a certain way, by the middle of March you know whether you are going to be mid-field, at the front or way at the back.

"Unfortunately the die was cast to some extent so Williams knew it needed to take action. It had to take a long-term view on this and that is precisely what it has done," they added.

Indeed, it would appear that even the shock announcement last month that Williams was considering a "potential sale of the whole company", wasn't as bad as it sounded, for the Grove-based outfit it was a means to enable it to look at the various options available, as Claire Williams admits.

"We started talking about the need for new investment last year," she tells Autocar, "before the virus was even on the horizon.

"We decided that if we were ever going to punch our weight again we needed support beyond what we could raise from the F1 prize fund or sponsorship," she adds.

"Our overriding desire is to find the best outcome for the team. If that means a full sale, it's okay. If it means sale of a majority as a path to a full sale, so be it. Or if it means someone wants to come in and work alongside us, that's fantastic.

"We could probably scrabble the funds together to keep going, but we've been doing that for too long," she admits. "It's time for change."

Of course, change is already coming... in terms of the budget cap and a total overhaul of the prize money distribution, which currently sees, courtesy of the Constructors' Championship Bonus (CCB), Red Bull receive a minimum $37m, McLaren a minimum of $33m and Ferrari $30m before they've so much as turned a wheel, all because of the number of races they won in the four seasons prior to 2012, the year in which the CCB was introduced.

"The current situation is completely changed by the new regulations," says Williams. "And funnily enough, the ante has been upped further by the way the virus has affected us all. We've come together to realise we have to do a better job of creating parity within the sport and of getting costs down."

Along with a new financial structure, the sport is introducing a whole raft of technical regulations. Originally planned for 2021, the pandemic has meant their delay until 2022 and in the meantime the teams will continue to use their 2020 cars.

Other than the fact that this will make "an enormous difference" in terms of spending next year, moving forward as teams are forced to manufacture more of their own components, Williams believes that her team's independence will be a benefit as its rivals are forced to secure similar levels of IP, expertise and equipment.

"Until now, being an independent hasn't made a whole lot of sense," she admits. "But we believe, and thankfully so do the new administrators, that doing your own design and engineering should not be allowed to be a disadvantage."