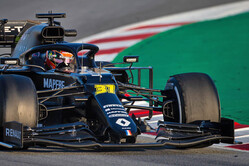 Renault team boss, Cyril Abiteboul reveals that the French outfit will be bringing a number of upgrades to next week's season opener.

Last year saw the French team slip fifth in the standings, behind McLaren and almost overhauled by Toro Rosso, and with the midfield battle looking to be even more fraught this season, Abiteboul reveals his team aims to be on the pace from the outset as it plans to introduce the upgrades that were planned for those races either cancelled or postponed.

"The upgrades are coming," he told reporters today. "It's been a huge effort from internal production to get the package from races three, five and six, the initial numbering obviously, from Vietnam, the Netherlands and Barcelona that will be on our car in Austria.

"Those races have obviously not happened," he continued, "but the performance that was supposed to come will be in Spielberg."

Nonetheless, the Frenchman insists on playing his card close to his chest, and like last year, refused to be drawn into making predictions.

"I want to downplay any expectations, because we know that our car was really, really bad last year," he admitted. "We just hope that it will be slightly better. We're still not totally sure about the competitiveness of our car from the winter test. I don't want to say too much at this point.

"There is clearly a huge satisfaction from the effort that has been put into getting all these parts available in quantity also, because we all know that Spielberg can be harsh for the cars, even if there has been some kerbs being removed. We all had to plan in quantities also, some parts which I hope will bring some decent performance to the car."