Leclerc downbeat ahead of season opener 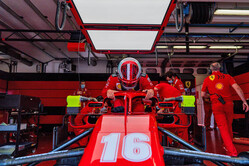 When most people think of 99 it's in terms of ice cream or the percentage of germs a well-known bleach will kill, but for Charles Leclerc it represents the degree of certainty he has that his team will struggle this year.

Pre-season testing was disappointing, and in the days leading up to this week's season opener it was revealed that Ferrari will not be introducing any upgrades until Hungary, the third race of the year.

Consequently it wasn't the empty grandstands, the face masks and surreal atmosphere within a usually bustling F1 paddock that had the Frenchman unusually downbeat.

Going into the weekend, while Mercedes and Red Bull look set to battle, there are fears that McLaren, Renault and Racing Point could trouble the Maranello outfit.

"I think it is going to be a very challenging season for us," he told reporters, "it is definitely not going to be easy.

"We still have this question mark," he continued, "and we still need to wait for qualifying to be sure of what we say, even though we are 99% sure we will be struggling more than last year. We were not where we wanted to be, especially on the qualifying pace.

"Then there’s been this whole situation with the virus," he added, "everything was closed, then once it reopened we reanalysed the data with the small amount of time we had.

"I think we decided to take a step back to try and analyse where the issue is coming from and then work on the issues, first to know exactly where it comes from, and that’s where we’re at for the moment, we have tried a different route for Budapest."