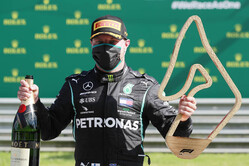 Understandably, after three months of waiting for the season to get underway, the tension is palpable.

As the lights for the 2020 Formula One season finally look set to signal game on, even sections of the media that usually dismiss the sport as elitist and damaging to the environment are looking on with keen interest.

Sadly however, the interest isn't in terms of whether Ferrari has been sand-bagging, Racing Point can upset the formbook or Max Verstappen can take the fight to Mercedes, but rather what happens in the moments before the race.

Two hours before the start, Charles Leclerc tweeted that he will not be 'taking the knee', though he was keen to make clear that this doesn't compromise his belief in the sport's aim to increase diversity and "end racism".

Sadly, the briefest of looks at the various responses to his tweet reveal all you need to know.

Not for the first time, the sport is looking set to make it into the headlines for all the wrong reasons.

Unfortunately for Charles, Knee-gate is unlikely to be the only issue he has to contend with today, for the Ferrari is proving to be even worse than predicted, and rest assured those predictions were not good.

Following weeks of speculation over Sebastian Vettel's future, and the lack of prospects for the German, with this year's car due to be used again next season it looks as though Ferrari has actually done the four-time world champion a favour.

Toto Wolff has summed up the situation pretty succinctly - though without resorting to the terminology used by Max Verstappen - the Austrian admitting that he is sick to death of Ferrari blaming its lack of pace on its aero, when the world and its dog knows that the Italian team has never recovered its form after last year's Flow-gate saga.

Much is being made of Vettel starting from eleventh and therefore with a free choice of start tyre, but the fact is that to have any reasonable hope the German needs one of those pre- Flow-gate power units.

Talking of grey areas of the rules... the pace of the Racing Point today will likely be matched, or even exceeded, by the speed with which at least one team will post a protest at race end, Cyril Abiteboul probably clutching the document as we type...

These things don't go away - we refer you to Red Bull's protest of Mercedes' DAS at the start of the weekend - and now that their worst fears have been realised even those teams willing to turn a blind eye to the (t)Racing Point are likely to be beating a path to the stewards office in the hours that follow.

Qualifying didn't go as well as Renault wished, Ricciardo losing out when Bottas made his late mistake. Race pace looked good in the sims however, and consequently both cars should be in a position to challenge for points.

Norris gave McLaren its best qualifying position for six years yesterday, and though we do not expect the Woking team to be worrying the likes of Mercedes or Red Bull, it should enjoy a good scrap with Renault, Ferrari and possibly Racing Point.

The Points, of course, are looking good, as well they might, and one suspects the ever-reliable Perez should bag a decent points haul. Stroll has looked a little wobbly at times this weekend, but may well settle down once the lights go out. After all, he hardly has to worry about job security.

The AlphaTauris are further down the grid than expected, but with the Honda in the back - and that smart paint job - Kvyat and Gasly should be in the thick of the midfield fight.

Haas and Alfa Romeo appear to have the same, ahem... "aero issues" that are affecting Ferrari, so expect to see Raikkonen doing his level best to avoid Grosjean and Magnussen lest it end in tears.

Williams remain at the back, but Russell doesn't appear to have received the message. Could the boy spring a surprise in the real world following his success in the virtual version?

Out front, while it looks to be all about Mercedes, one can never rule Verstappen out of the equation, especially as he has won here for the last two years.

The opening three practice sessions suggested that it was business as usual, with Hamilton leading the way. However, Bottas turned everything on its head in Q3, the Finn suggesting that version 3.0 is about to make his debut.

With Ferrari seemingly out of the mix, Verstappen will be keen to take the fight to Mercedes, and though he doesn't have the Orange Army cheering him on from the stands, he is on home ground.

The only one of the top ten starting on mediums, Verstappen is going to be interesting to watch in the opening laps.

A strong showing from Albon also yesterday suggests that Red Bull has strength in depth.

In a late bit of drama, Hamilton was called to the stewards after Red Bull requested a review of the incident in Q3 in which Hamilton failed to slow for the waved yellow.

Having lost the DAS protest, the Austrian team clearly hasn't given up.

The warmer weather today will mix things up a little, especially in terms of tyre wear.

The fastest strategy is a one-stopper, starting on the softs for 24 to 28 laps, before switching to the hards. Alternatively, start on mediums for 27 to 32 laps, before finishing on hards. These two strategies have a more or less identical total race time, but the latter offers slightly more flexibility.

The second-quickest strategy is to start on the softs for 30 to 34 laps, then go to mediums to the end.

A two-stop strategy is definitely slower, but it would go like this: two stints on the soft tyre of 16 to 18 laps each, then finish the race on either the medium or the hard compound, depending on how things were looking at that point.

And 40 minutes before the start, the stewards announce that Hamilton has been given a 3-place grid penalty which means he will start 5th, while Verstappen starts 2nd and Albon 4th.

The pitlane opens and one by one the drivers head out to take their place on a rather strange looking - read almost deserted, certainly in terms of 'celebrities' - grid in front of empty grandstands.

Sainz reports a light puncture, while Vettel asks to be brought his helmet screwdriver.

Ahead of the national anthem, 14 drivers 'take the knee'... after which we cut to the podium where a sextet, all wearing national costume, plays Land der Berge.

Other than Verstappen, all bar the other drivers in the top ten start on the yellow-banded rubber.

The field heads off on the warm-up lap.

They're away... and heading into T1 Bottas is just ahead of Verstappen as both make strong starts. Heading into the corner Norris is alongside the Red Bull but runs wide at the exit.

Behind, Leclerc runs wide also as he battle Perez.

Heading to T3, Bottas has a clear lead, as Norris continues to hound Verstappen and Hamilton is alongside Albon.

At T4 Hamilton has to back off or risk a collision with Albon, while Perez, Norris and Leclerc scrap behind.

Leclerc attempts to make a move on the Mexican but the Racing Point has the advantage of the Ferrari.